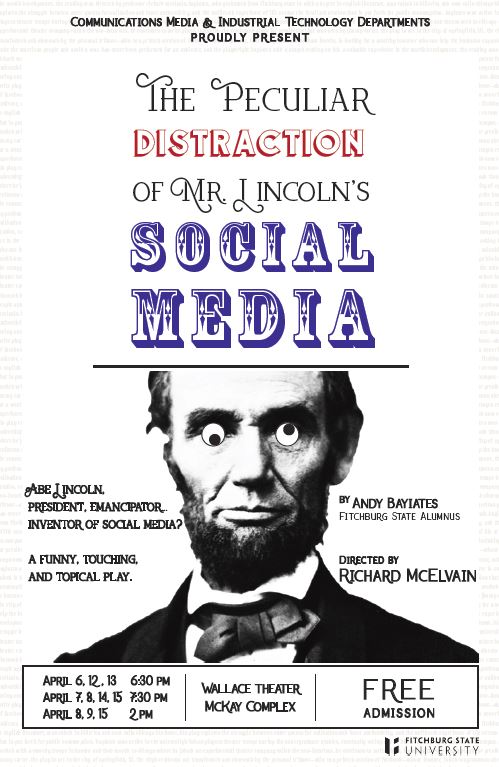 What if Abraham Lincoln created social media, not with technology like today with Facebook, Twitter, Instagram etc., but instead with printing presses? What would social media be like in the 1800’s? Would it create more sophisticated conversations with other people and bring people closer together?

Naaah….it would pretty much be the same as it is today, with people bragging about everything in their lives, becoming nosey about other people’s business, and discussing about important political issues without ever actually acting on them. Written by Andy Bayiates and Directed by Richard McElvain, Fitchburg State’s “The Peculiar Distraction of Mr. Lincoln’s Social Media” explores this fantastic idea with gripping drama and well-placed humor.

The setting is Springfield Illinois, 1853. A young Mr. Lincoln has not yet changed American ethics as our 16th president, but instead works as a newspaper publisher. The play centers on a strong woman named Mabel Prescott (Meighread Dandeneau), her mother Ruth Prescott (Nina DiRusso), the wealthy William Broody (Michael Furlong) and the emotional, but well-meaning Bernard Parks (Nicholas Spatola). Both of the men are pitting into a game of which publication can retain the most popularity and followers. As this popularity contest starts to get tenser and tenser, it becomes clear that William and Bernard’s game is not just for the most followers, but also for Mabel.

It did seem odd at first that the play with Mr. Lincoln in the title does not have Lincoln as the main focus, but it is almost irrelevant with the performances by all the actors in the play. All five of the main characters, including Lincoln (Tyler Rost), do excellent work, each showing comedic attributes in their characters as well as good dramatic chops. It would also be a failure to not mention the supporting characters, as each actor was unique and memorable in their respected parts.

Probably what sells the premise of the play the most is its commentary on how our society misuses social media, especially in this politically toxic time we are living in now. The characters act like they are becoming closer to one another through “posting” and “subscribing”, but in reality they are slowly ripping people away from each other. In particular, without spoiling the ending, what the creators of the play have to say about people who talk big about politics, but never take affirmative actions is particularly powerful.

In short, going to see “The Peculiar Distraction of Mr. Lincoln’s Social Media” will not only entertain you the whole way through, but will also have you thinking about how our social media may be more problematic than we often consider.