To an Outsider: Interview with FSU's Tri Sigma President 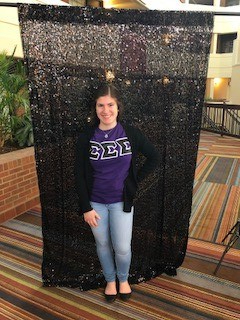 It’s that old cliché statement we hear time and time again: you never know what something is truly like until you experience it firsthand. This can directly correlate to a numerous amount of life events, feelings and moments. But specifically, it can connect to sorority life at Fitchburg State University and is a great place to put this idiom to use. I had the opportunity to sit down with Tri Sigma President Demetra Zouzas to not only talk about her chapter, but sorority life here on campus as a whole. It felt important to add that the questions I had for Ms. Zouzas came from someone whose knowledge of Greek life derives from what is shown in the media, similar to many others. Being a member of a sorority is special in itself, but being a “Sister” for Fitchburg State University is the experience of a lifetime. When a student here at Fitchburg State becomes a member of a sorority, she is truly investing in her future. This is the belief of Demetra Zouzas, President of Tri Sigma. For Demetra and her sorority sisters, being part of a sorority allows girls to become part of something so much bigger than themselves. From branching off to work with the two other sororities on campus, Alpha Sigma Tau, and Phi Sigma Sigma, to learning about and helping raise money for various philanthropies, the Panhellenic women of FSU do their best to contribute towards helping great causes and working to create the best version of themselves.
As touched on above, though people often form their own stereotypes when it comes to sorority life, perceptions always change once on the inside. Many girls are often nervous while going through recruitment, for they do not know what their experiences will entail and may have a lot of false, preconceived notions. For FSU’s Tri Sigma President, this sounds all too familiar. “I felt this exact way. But after actually going through it all and being on the other side, it’s not what you expect. When we’re looking at new members we are looking at the future leaders, the future club members- people who are involved, people who are contributing to the community around them.” This is especially true since there is such a diverse student body here, and each sister has her own passions and skills. Sororities look for leadership qualities within each member and from there, go on to see which chapter would be the best fit for them. No matter which sorority a girl joins, she will still become involved in the two others, allowing for diverse integration. The Fitchburg State Sororities, Tri Sigma, Alpha Sigma Tau, and Phi Sigma Sigma, and fraternities, Sigma Tau Gamma, Sigma Pi, and Alpha Phi Delta all support each other, especially when it comes to charity work. Each sorority has its own philanthropy and has an event every year to help raise money for it. From bringing each other snacks, water, or just hanging round to help show support, the chapters are always looking out for one another. In Tri Sigma specifically, they will have an annual teeter totter to for the Robbie Page Memorial Fund (RPM) which helps promote play therapy for terminally ill children. Over the course of forty hours, Tri Sigma sisters see-saw and are always grateful for the helping hand the two other sororities give. According to Demetra, “Whenever it comes to things like that we know how hard it is to put on those events so we always make sure we are looking out for each other.” Besides philanthropic work, Sisters also put on events just for the sake of bonding and getting to know the other chapter members more. For example, just last semester, Tri Sigma, Alpha Sigma Tau, and Phi Sigma Sigma all got together in the kitchen area of Aubuchon Hall for a letter-making social. Together, the sisters all hung out and made t-shirts.
Demetra believes that it is especially important to get to know some of the other sorority girls on campus due to all of the collaborations that take place. By making both comradery and support a focus, it helps girls immensely with confidence and skill-building. Greek life as a whole makes up a large portion of Fitchburg State leadership on campus. Many sorority members are orientation leaders, tour guides, and even resident assistants. The benefit of this is that sisters will meet a multitude of other students through fellow sisters because they are involved in various clubs on campus. This allows for connections that are easily set up, and clubs are always open to work with sororities. This lets club members know that Tri Sigma is not just here for Greek life, but for clubs on campus as well. 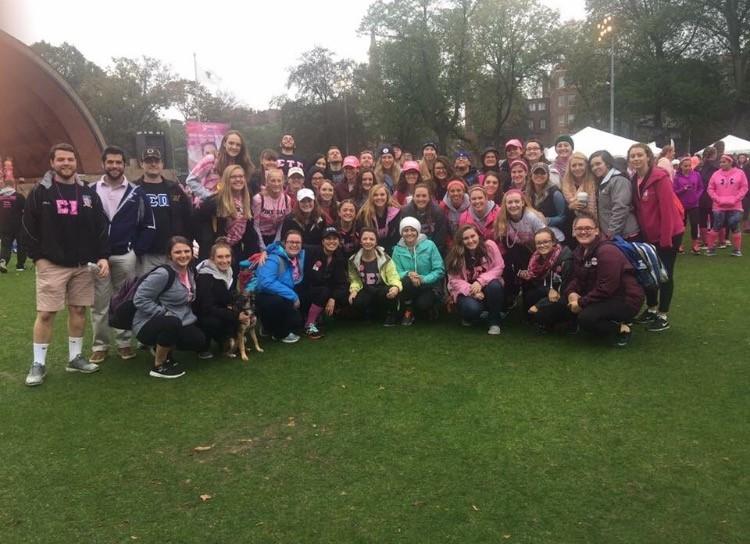 For those who would like a broad, pictorial glimpse into the sorority lives of Tri Sigma sisters, it is as easy as a few button clicks. Tri Sigma is on social media for two specific reasons. Not only to help propel the chapter into the public eye, but also to involve sisters with positive posts. Every week on its Instagram page (@trisigmafsu) Tri Sigma makes a “Sister of the Week” post that highlights one of its members and shines a spotlight on them. “We want to show what we are doing, and the good we are doing for the world,” Demetra says with a smile, “This is pretty much us saying that we’re positive. If we have an event coming up, we put it on our social media to get the word out and get more people to try to come. If we do a collaboration with one or both of the other sororities, we will put it on there. We like to show that we are so much more than what is stereotyped.” Students can see this positivity promoted all throughout the campus with banners that Tri Sigma puts up. As stated above, it is advantageous to have members with varied skill sets because whether it is a crafty social media team, or a strong public relations chair, Tri Sigma always has help whenever they need it. This is a factor that Ms. Zouzas is thankful for: “It is so great to get sisters from all different backgrounds and majors because you can do so much more, everyone has something to bring to the table.” Be sure to check out Tri Sigma not only on Instagram or in flier-form, but on Twitter as @TriSigma_FSU, and Facebook as “Sigma Sigma Sigma at Fitchburg State University.”
In the end, after a thoughtful interview with Tri Sigma’s President, it is important to conclude that if a student here at Fitchburg State has the slightest idea that she wants to join sorority life, it is so important for her to go for it. After all, if one feels that it is not for them, they can always say no. At Fitchburg State, once a student gets a bid they have twenty-four hours to accept it and can always say no. Being a sister here at Fitchburg State is a great opportunity to grow and become more involved. It really does give young women a multitude of leadership qualities that they would never imagine possible. To leave readers with final, thematic words from Demetra Zouzas, President of Tri Sigma Sigma herself, “People say this all the time but it is so true- you don’t know what it’s like when you’re on the outside but once you’re on the inside I can’t explain it. It’s one of those things you just have to experience. Be confident in yourself, and go for it.” 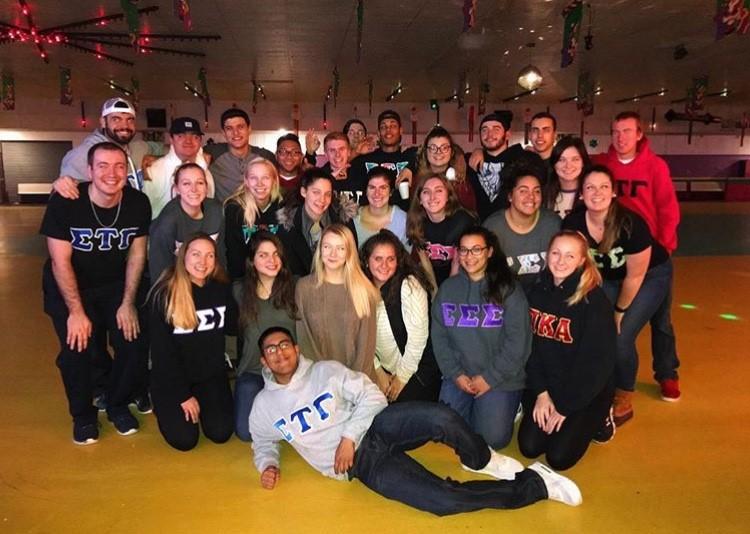