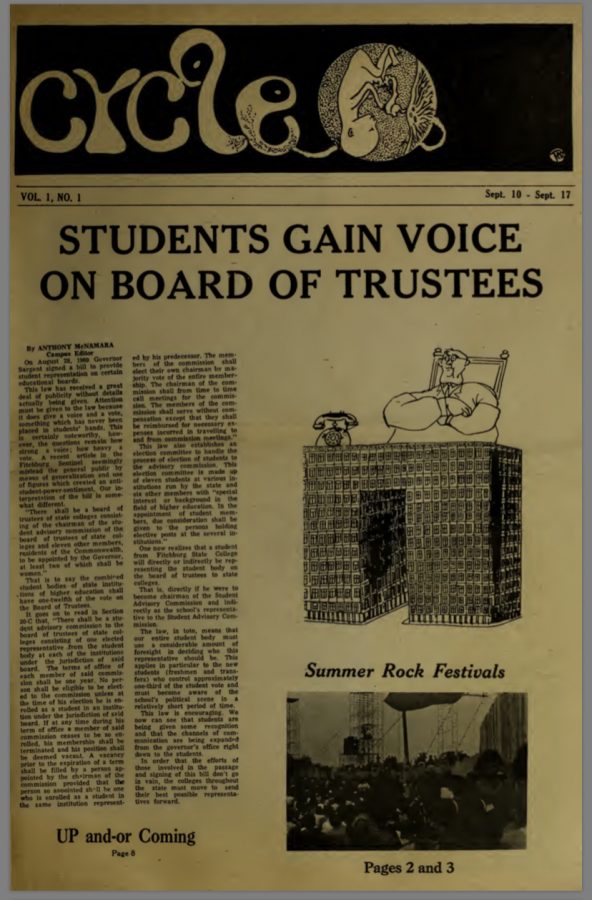 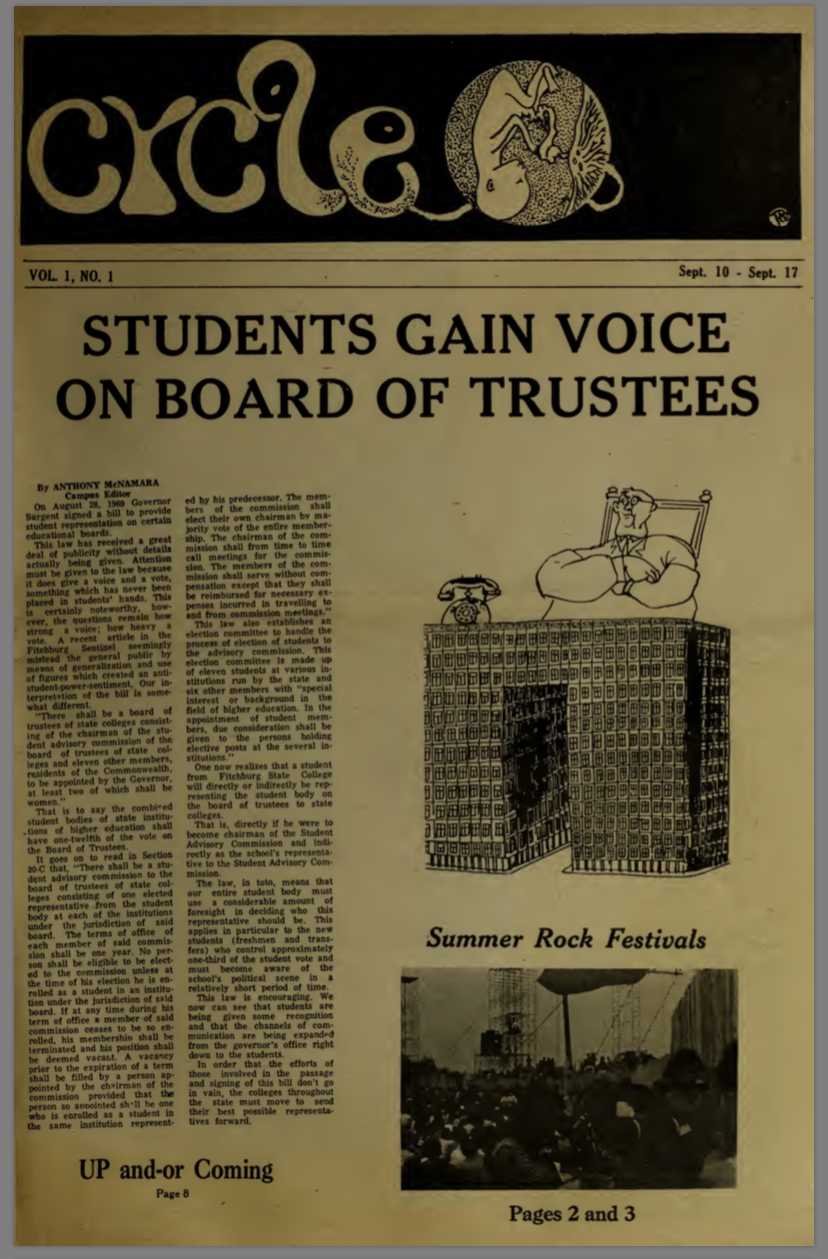 by John Plue
Take a step 50 years into the past and put yourself in the shoes of the Cycle’s editor-in-chief John Antonelli. It is the beginning of the 1969 fall semester at Fitchburg State and an article in the student newspaper has been censored. Then, you try to publish another issue and the entire paper is being turned away from print.
That is what happened to Antonelli and the staff of the Cycle. They decided to publish “Black Moochie” in their third issue of the year. Raymond Plante, the paper’s usual printer, read over the article and did not like what it had to say. He took it to the president of the University at the time James J. Hammond Jr.
The Cycle wasn’t always known as the Cycle, it was once called the Kampus Vue, which focused on on-campus events and news. Antonelli wanted to change the focus of the paper and rather have it focus on “areas of broader social and political impact” according to an article about the event on Justia, a website that specializes in legal information retrieval. According to an article by Marisa Donelan in the Lowell Sun, in 2011, “they were college kids with a cause: free speech” and they were “publishing stories about the unrest across the United States with the Vietnam War and ongoing civil-rights issues.” The students were keeping up with that standard when they chose to publish “Black Moochie”.
“Black Moochie” was written by Eldridge Cleaver, one of the first leaders of the Black Panthers Party, and was originally published in “Ramparts Magazine”. Cleaver was an American black militia and the Party’s Minister of Information. “Black Moochie” was about sexuality and racism. The narrator of the story spoke about his attraction to a teacher and another student. Both instances featured graphic detail on the sexual attraction he felt and the racism that he faced.
When the staff of the Cycle put their next issue together, with “Black Moochie” in place and sent it off to get published. When it reached Plante he read it over and according to Justia he “strenuously objected” to the language and theme of “Black Moochie.” He brought it immediately to Hammond’s attention. According to Justia Hammond, had already “not been pleased with the change in the focus and format that previous issues of The Cycle had brought to the campus newspaper.” Hammond was quoted in the Worcester Telegram saying, “This is an era of radical change, often frenetic. Change is inevitable and the process is good, but not all changes are either inevitable, or good…I am still confident that the majority of people still opt for decency, modesty, moderation, and propriety.” These principles did not matter to Antonelli, and he sued Hammond for violating his First and 14th Amendment.
Harold Dulong, a student just out of law school read about the situation and called Antonelli offering to represent the young journalists free of charge. They took that offer and took Hammond to court.
The First Amendment states “Congress shall make no law respecting an establishment of religion, or prohibiting the free exercise thereof; or abridging the freedom of speech, or of the press, or the right of the people peaceably to assemble, and to petition the government for a redress of grievances.” The fourteenth amendment is “All persons born or naturalized in the United States, and subject to the jurisdiction thereof, are citizens of the United States and of the state wherein they reside. No state shall make or enforce any law which shall abridge the privileges or immunities of citizens of the United States; nor shall any state deprive any person of life, liberty, or property, without due process of law; nor deny to any person within its jurisdiction the equal protection of the laws.”
It was not only the refusal to publish the paper that pushed Antonelli to sue Hammond, but also the fact that Hammond gave them more hoops to jump through to get future papers published. According to the Fitchburg State University website, “President James J. Hammond Jr. told the students they would have to have future content screened by a committee.”
On November 7, 1969, Antonelli and the editorial board put their resignations in. However, according to Justia, the Student Government Association showed their solidarity for the staff by refusing to recognize the staff’s resignation letters. There was also a vote on whether a weekly newsletter should be kept up while the Cycle was down, this newsletter would be edited by those, like Hammond and Plante who opposed the Cycle. The Student Government Association voted against it.
Despite Hammond’s and Plante’s efforts, “Black Moochie” was still published, just not in the Cycle. Salem State University printed it in one of their issues and through a combined effort of the editors of the newspapers of five Massachusetts State colleges.
The final decision of the case was made in favor of the students. Despite the Cycle only publishing four issues, the matters they fought for shook the school. This incident showed that student publications are aware of their freedom of speech and freedom of press and can, and will fight for their rights.
John Antonelli did not finish his degree at Fitchburg State University, however, according to the Worcester Telegram, he was awarded an honorary doctorate degree at the school’s 117th commencement.