A Wild Week at the White House 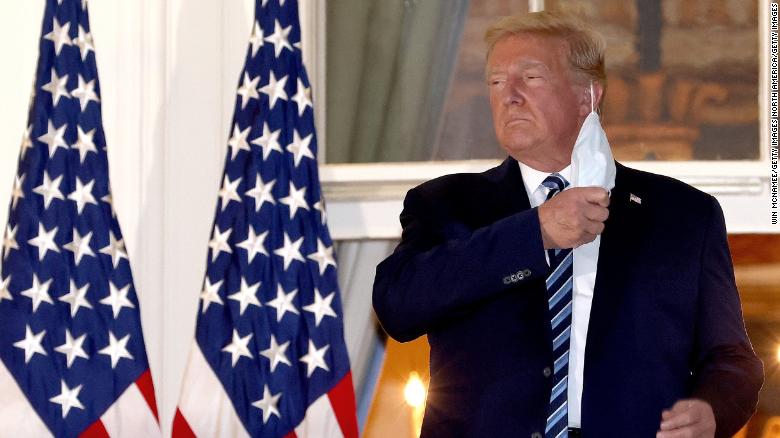 The Point Staff –
The President tweeted out early on Friday Oct. 2 that he and the first lady had both tested positive for COVID-19. Trump left for the Walter Reed Medical Center later that Friday evening.
According to the New York Times, White House physician Sean Conley confirmed President Trump’s diagnosis on Friday, but no one knows how he contracted it. COVID-19 spread throughout the White House before President Trump’s diagnosis. At least eight people confirmed testing positive for COVID-19 on Sep. 26 at the Rose Garden Ceremony that President Trump attended. White House advisor Hope Hicks had tested positive earlier in the week. Hope Hicks had traveled with Donald Trump aboard Air Force One to the debate on Thursday. White House advisor Stephen Miller and  campaign advisor Jason Miller were both exposed. Ronna McDaniel, chairwoman of the Republican National Committee, tested positive with mild symptoms and had met with Donald Trump last Friday. White House press secretary Kayleigh McEnany and former New Jersey gov. Chris Christie both tested positive for COVID-19 and had been in close contact with President Trump. According to the CNBC, Dr. Jeremy Faust, an attending physician at Brigham and Women’s, “the president could have been infected any time in the last week.”
When news first broke the public was caught walking a fine line when talking about the irony of President Trump testing positive for a deadly disease. The same can be said for major news outlets such as Fox News, CNN, and MSNBC. The public and the media was divided on how to react to the shocking development.
CNN chose to air clips from the first presidential debate, highlighting President Trump’s comments on former Vice President Joe Biden wearing a mask. Carl Bernstein, a reporter for the Washington Post publicly criticized the President about his inability to stop the pandemic early on.  MSNBC took a more passive approach to the news, as they talked about the risk President Trump was at considering his age and physical condition.  Fox News reacted in a surprising manner to many, with them suddenly putting an emphasis on hand washing and wearing a mask in public. Things they hadn’t previously been endorsing. One thing to note was the network continued to run headlines, and highlight that the President and his entire staff received daily testing.
Since contracting the virus, information and updates on the president’s health have been given by his team of doctors, however their information has given some medical professionals cause to believe that the truth is being obscured. On top of this, since the president revealed his diagnosis on Twitter, with no updates in the hours following, rumours began to spread vehemently throughout the internet. According to NBC, On Friday Oct. 2, White House chief of staff Mark Meadows told reporters that the president was experiencing “mild symptoms”, but refused to elaborate further on the president’s health. On top of this, in a letter from White House physician Sean P. Conley confirming the president’s diagnosis stated that both the president and the first lady were “well at this time.” Later in the day, after experiencing “mild symptoms”, such as a low grade fever, the president was flown by helicopter to the Walter Reed National Military Medical Center. On Oct. 3, Mark Meadows went against White House statements that were downplaying president Trump’s symptoms and stated that the president’s condition took a turn for the worse and his “blood oxygen level dropped rapidly”. To add to the confusion, White House physician Sean Conley stated that president Trump was “72 hours into the diagnosis” when it had only been 36 hours since he announced his positive test results. Conley later went back on his statements. On Oct. 4, only one day after tweeting his first update video in which he stated he felt “much better now”, the president’s medical team stated that his condition was improving after several “episodes” over the weekend. President Trump’s medical team also released information that he had been placed on a type of steroid therapy that is usually used in severe cases of COVID-19. On Oct. 5, President Trump returned to the White House, seemingly in better health, yet he showed symptoms, which went against White House physician Sean Conley’s statements that the president “reports no symptoms” of the virus.
According to various sources, Trump has been given remdesivir and dexamethasone in addition to an antibody developed by Regeneron. Additionally, he has also been supported by supplemental oxygen. These forms of treatments are typically reserved for someone who is having a more serious case of COVID-19, which contradicts some of the messages that he has been saying as of late. Not to mention, the antibody that is being developed by Regeneron is highly experimental and is still being tested by the FDA. The drug has also not gone through randomized clinical trials, which could be concerning. Dexamethasone could also have some long term issues as a result, and could have severe side effects such as increased agitation, paranoia and psychosis. Trump is also being aided by an in house medical unit that is within the White House after being moved from Walter Reed and is receiving a consistent flow of medical treatment and is being heavily monitored. A normal patient who has contracted COVID-19 would spend $100,000.
The status of the next presidential debate on Oct. 15 is still in the air, as Trump’s campaign claims he is ready to participate in public events. The debate was originally modified to take on a virtual format, but Trump stated he would not participate if that were the case.