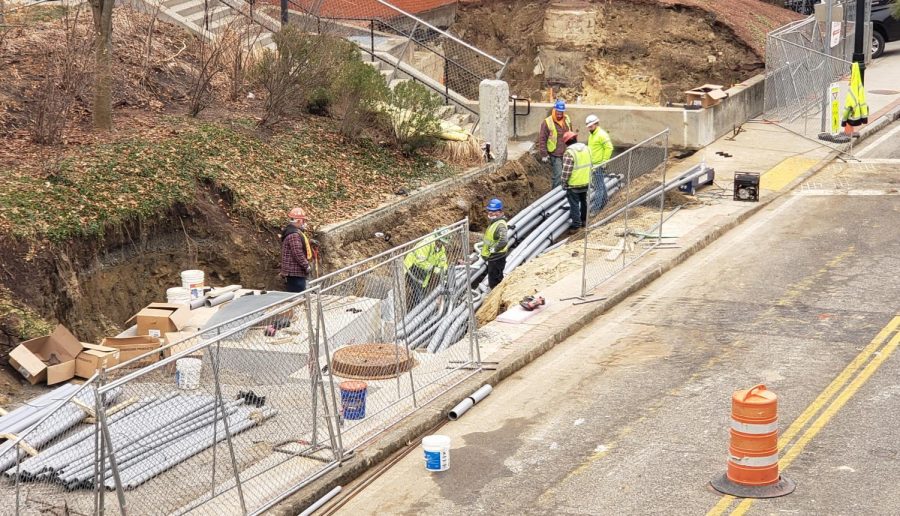 Three years ago when I started at Fitchburg State, I began my residence at Russell Towers like most on-campus students. It was crowded, loud, and definitely a lot of fun as a freshman. However, these rowdy towers weren’t the model for a positive sleep environment. Whether it was your neighbor’s seemingly bass-boosted speakers, or the waste management trucks taking care of dumpsters under windows, mornings were usually early in Russell. As if dodging the COVID Virus leaching through the towers wasn’t enough to lose sleep; new students this year are experiencing a new kind of noise that, in comparison to the other sounds of Fitchburg, is a primal shriek rather than the whisper of the latter.

Construction fever has begun, starting on the quad in front of Capital Planning and Maintenance, expanding now to include two sides of Conlon Hall and the underpass below the Dining Hall. According to public releases from Capital Planning, the project is a “fully state-funded DCAMM Electrical Infrastructure Renewal Project”. Portions of this campus are pleading for improvement, and it seems maintenance is striving to appease. “This electrical infrastructure project will be one of the largest and logistically heavy projects this university will have completed. Once the project is completed it will give the university a reliable electrical infrastructure system throughout the main campus”. I agree, this is the perfect time to be doing construction. With the majority of students studying virtually, the University should finish work the right way now. However, I was left wondering if students have as favorable of an outlook as the administration.

This brings us back to the storied Russell Towers, where students have told me that they have been losing sleep thanks to the construction. While those lucky enough to be on the A-side of the Towers didn’t report their noise frustrations, the students that were randomly assigned to the C and D sides of the building complained about jackhammers, construction machinery, and other noise pollution taking place. Apparently, the early bird gets the worm in the construction industry, with work starting as early as seven in the morning as one student noted. However, Russell students’ qualms go beyond the noise, as one of the main campus access routes has been blocked for several weeks due to the work. However, route closures are a common side effect of construction, as anyone from Boston can attest. Beyond this, the construction fences next to the Hammond Building have been known to fall in the wind, blocking the majority of the pathway into the radio station, EMS building, and one level of Hammond Hall. Students also remarked that the workers are doing a less than stellar job following COVID mask guidelines.

Since construction ended in front of Capital Planning and Maintenance, there has been a vacant fence area with large piles of dirt from the digging that took place in the area. Fences there have fallen too, again blocking most of the width of walkways adjacent to said fencing. This dirt-pit sadly takes away attention from the great care taken to recreate the brickwork in the main area of the quad. Workers intricately replaced the square brick-by-brick, and it must be acknowledged that without the remaining worksite, there would be no indication of construction at first glance. However, as you work your way down the campus this begins to change. The crumbled curbs and long strip of oil-black patchwork have gone untouched since electrical work left. The courtyard in front of Conlon Hall was one of the most photogenic areas on campus prior to the work, but now the cobblestone patterned sidewalk has been relegated to a fraction of its former self. After the last construction update remarking on the new worksite under the Dining Hall, I replied to the Office of Capital Planning asking whether or not they would be replacing the brickwork as they had in front of their own building. I never received a response, and weeks later the area remains untouched. Now, the outside of Conlon hall is beginning to look like the inside: old, broken, and patched-up.