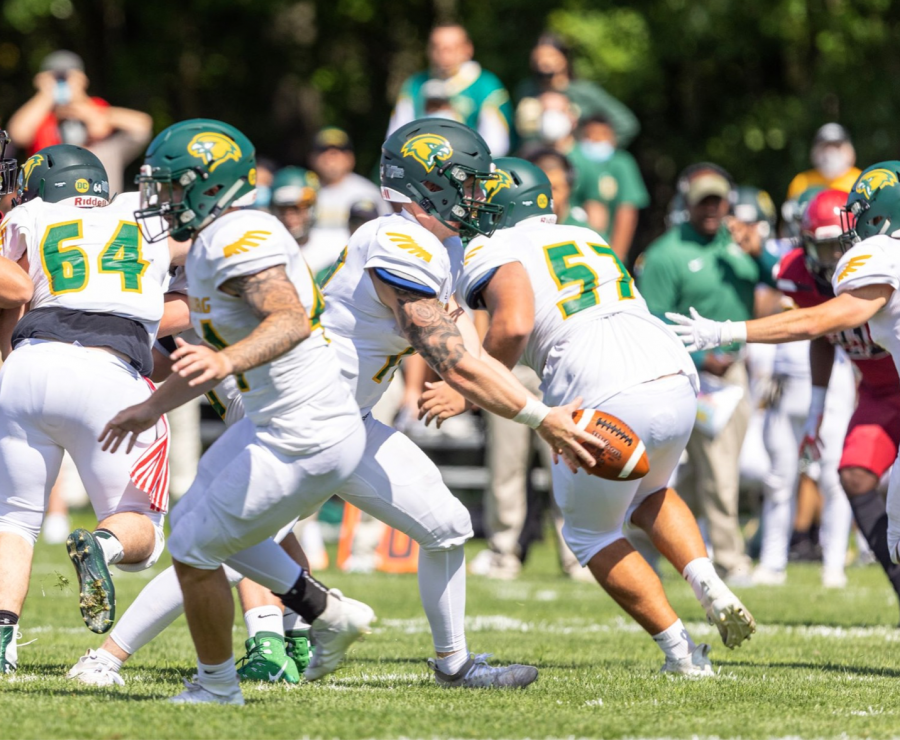 The Fitchburg State Football team lost to Western Connecticut by a score of 48-13 on Saturday, Nov. 6, leaving the Falcons with only one game left to pick up a win on the season. Fitchburg dropped to 0-9 with the loss, as West Conn jumped up to an even 5-5, where they will wrap up their season. Western Connecticut came out of the gates quickly, continuing to push forward on the Falcons throughout the game. Fitchburg was unable to put up much resistance on defense, however they were able to have one of their more offensively impressive games so far.

Western Connecticut scored 28 points before the Falcons were even able to drive deep into their opponent’s territory. Fitchburg scored on a three-yard rush by quarterback Joe Haskins to put their first set of points on the board in the second quarter. Western Connecticut answered quickly however, making the score 35-7 going into the half. West Conn came out of the half aggressively, tacking on a touchdown to make the game 41-7. The Falcons would not be deterred by this, driving down the field before finding more success.  Fitchburg was able to convert on a fake punt, which would ultimately set them up for a look at another six points.  Haskins was able to evade pressure before finding Matthew Aguirre in the endzone for their second touchdown of the game, making the score 41-13, in favor of West Conn. The visiting team would add on a final touchdown late in the game, making the final score 48-13, with Western Connecticut being victorious.

Justyn Stanford stood out for the Falcons, racking up 78 yards on 22 rushing attempts, being the clear focal point of the offense. Haskins had one of his better games of the season, throwing for 52 yards and a touchdown. John Giller had a huge game for West Conn, throwing for 177 yards and a trifecta of touchdowns. Mack Driver had two touchdowns, being prominent for the Western Connecticut offense.

Senior Rodny Bonhomme remained positive on the season going into the weekend. Bonhomme said, “I’m pretty excited about senior day. We had a good week and we feel like we are going to win. We don’t want everyone to think that we’re 1-9 this year, but 1-0 going into next season”. Bonhomme will most likely be playing his final game as a Falcon on Saturday the 13th, and hopes to see the team head into next season with a positive mindset. It seems to be a good game for a night of celebration, as this should be the best chance for the Falcons to pick up a win, as Westfield State is the only other team in the MASCAC without a win. Fitchburg will look to end the season with a win, saving them from an 0-10 season.