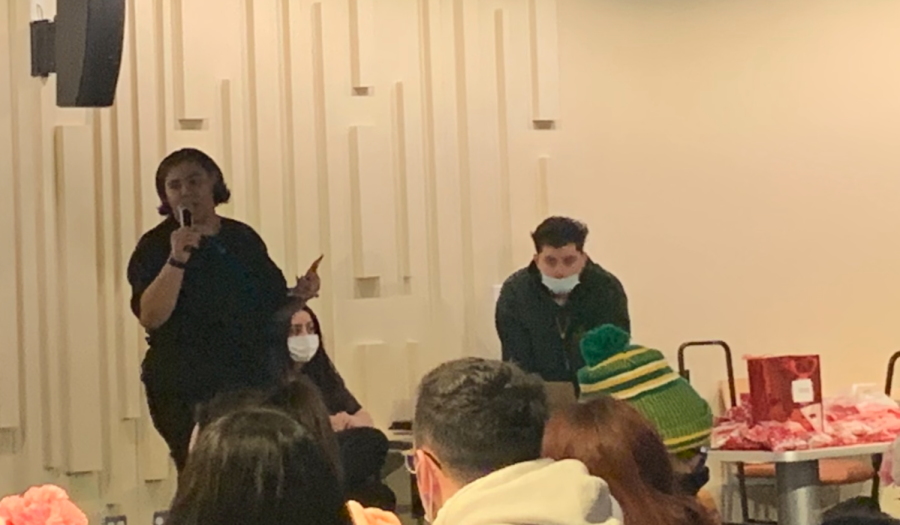 To celebrate the spirit of love and affection, the Latin American Student Organization held a Spicy Bingo Night on Feb. 15, 2022 in the Falcon Hub. Guests were entertained with a game of bingo, with a twist. An ordinary game of bingo is pretty simple. If a player marks five spots in a row on their bingo card they get a prize. Most of the time that prize is a gift card, event tickets, or a basket of goodies—but not on Spicy Bingo Night. The twist lies in the “spicy” prize: sex toys.

Attendees were greeted with a complimentary condom upon arrival. The room was packed and the unorthodox theme of the event had people howling in laughter and giggling throughout the night.

As intensity built during the bingo game, it came to a head when two players screamed bingo at the same time. As the organizers of the event discussed a way to settle the tie, Kevin Rodriguez grabbed the microphone and yelled, “Dance Battle!” The crowd was in an uproar. It was agreed that the tie would be settled through a singing competition between the two contenders instead, but the winners had to choose a proxy to serve as the competitors in the singing competition.

“I wanted my friend to win something,” said Rodriguez, who was selected as a competitor against Javon Taylor, fellow student. Kevin sang “Let Me Love You” by Mario, and Javon sang “Baby” by Justin Bieber.

“I wanted to do something I was good at—I’m not a good singer but I’m a good entertainer,” chuckled Rodriguez, “…so let me sing, let me give a performance, let me give them a show!”

Taylor echoed Kevin’s sentiments and noted that being on stage just felt organic. “That’s my personality. I like to make things fun,” said Taylor,. “It felt natural. You could tell everyone was having fun.”

Both Rodriguez and Taylor garnered a lot of respect for each other. “He was a good singer to be honest,” said Rodriguez after losing the competition, “I respect him so much.”

Taylor mirrored Kevin’s attitude. “He had a lot of energy, dope personality, and he’s just looking to have fun.”