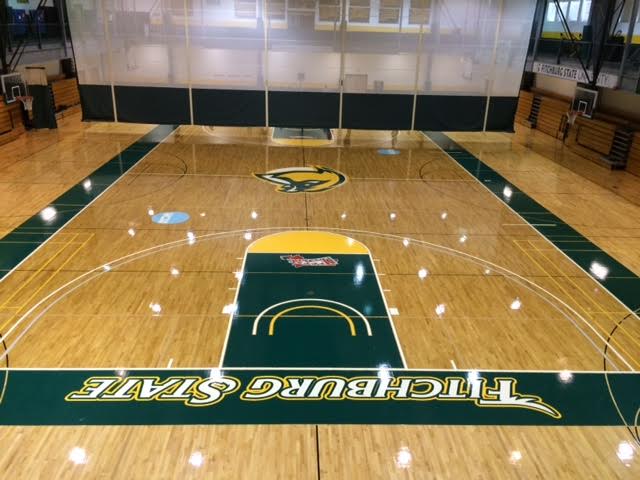 Fitchburg State University has had its fair share of construction in the past few years and this year, with renovations and improvements being completed throughout the campus. At the Recreation Center, new basketball courts may stand out as the most noticeable addition, appreciated by student athletes and intramural stars alike.
“We wanted the court to be a statement piece for athletes and potential students,” said Director of Recreation Services Brad Cohrs, who played a fundamental role in the replacement of the hardwood at the Rec Center.

The wood, which sports a lighter color than a year ago, was a project that took almost three months to complete, dating back to the late days of May.

The process consisted of a complete sanding of the court down to the base wood, which had never happened since the Rec Center’s opening in 2000. “The company came out with over 100 large garbage bags of debris from the old wood,” said Cohrs.

Fitchburg State University, like many smaller universities in the state, don’t have the luxury of having a varsity basketball court that is separate from the courts used by students on a daily basis. The new courts were designed to fill multiple purposes, from the school’s basketball teams to the intramural athletes that flood the courts throughout the fall. “How do we have a court function as a beautiful varsity court, but also serve for intramural use?” – that’s a question Cohrs needed to answer as he oversaw the production.

He found this balance by changing the color of the volleyball lines to a peanut-shell color, which is also used for intramural volleyball lines; the new color blends into the hardwood from afar but is easily distinguishable from up close. The courts also got an upgrade for varsity use with the addition of a green coat of paint down the court sidelines, which was absent from the coat of paint from a year ago. “I heard stories of visiting players dribbling the ball right out-of-bounds on the old courts because they couldn’t tell where in-bounds ended on the sidelines,” Cohrs remarked.

The summer-long project was done by O’Sullivan Flooring, a company that specializes in gymnasium floors. Based in Quincy, O’Sullivan Flooring has re-done basketball courts for universities and high schools throughout the state of Massachusetts, and even for the Boston Celtics – which could explain the resemblance between the University’s new hardwood and the famous parquet at the TD Garden.

A notable change from FSU’s previous basketball courts is the Falcon logo at center court, which differs slightly from the school’s athletic logo but was done freehand by an artist contracted through O’Sullivan Flooring, completing the falcon with “nothing but tape.”

The basketball courts may be the first of other minor improvements at the Recreation facility here at the school. The lighting fixtures in the gymnasium are next on the list, Cohrs said, followed by increasing the efficiency of the air-conditioning systems to combat the heat many experience while working out in the school’s weight room.
However, students will need to wait until the spring semester to see additional upgrades to the Rec Center.