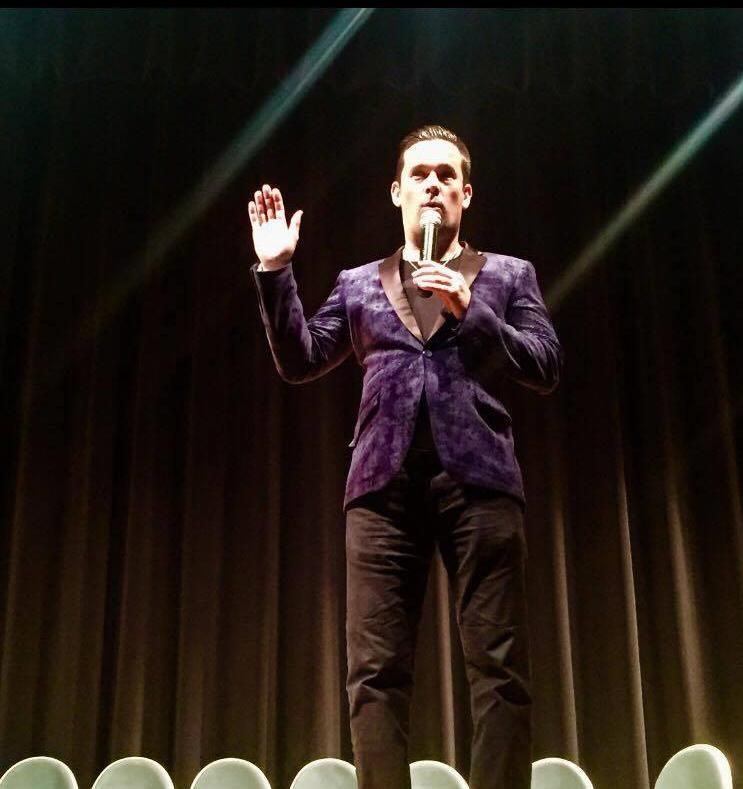 After a five-year absence, hypnotist David Hall returned to Fitchburg State last night to perform his show, “Cards Against Hypnosis”, at Weston Auditorium to resounding cheers and laughter.

“I want to give you the best hypnosis show you’ve ever seen,” stated Hall, as he opened the night by choosing twenty crowd members to join him on stage to be hypnotized. However, rather than simply letting those chosen, sit on the stage the entire night, Hall began the process of weeding out those who he deemed as being “resistant to hypnosis.”

Once the crowd of twenty on stage had thinned to about ten participants, they were then placed under hypnosis by Hall and “Cards Against Hypnosis” began.

“Cards Against Hypnosis” works in one of two ways. Hall will either throw something out into the audience, such as a frisbee, where the person who caught the object will choose one of two scenarios for the participants to perform, or Hall will ask the entire audience which scenario they would like to see performed.

Such examples of the scenarios created through this process included a dance competition to win a full college tuition, yelling at the audience in space alien language, and watching a funny movie only to be interrupted by the word “popcorn,” which would trigger the participants to answer their shoe as if it were a phone.

These scenarios resulted in raucous laughter from all those in attendance. Asking one student after the show had concluded what their thoughts were, they were quoted as saying, “The hypnotist show was a lot of fun. Although I wasn’t getting hypnotized, there was a lot of crowd participation, and it was very entertaining. David Hall did an outstanding job keeping the crowd entertained.”

Hall has been performing hypnosis for about 10 years and trained as a stage hypnotist in Las Vegas. Originally from Minnesota, Hall moved to Vermont to study business. There, he fell in love with hypnosis after watching a show himself and devoted much of his time to perfecting his own stage show.

The process of training for a stage show took about four years, which is where he and a friend came up with the idea of “Cards Against Hypnosis.” Hall said that “…my friend and I were looking for more interactive ways to perform hypnosis,” as opposed to having complete control over the situation. “My friend and I started talking about screen projection and different media to incorporate, but then the idea of the cards happened,” in an attempt to simplify their idea.

After development, Hall finally came to “Cards Against Hypnosis,” and it has been a success ever since. From the roaring laughter that came from Weston Auditorium, it can be assured that it was a success at Fitchburg State, as well.

Hall, not content with being a hypnosis, also performs magic. With the possibility of Hall coming back to Fitchburg State with his magic show, it would be wise to keep keen eyes on his return at a later date.