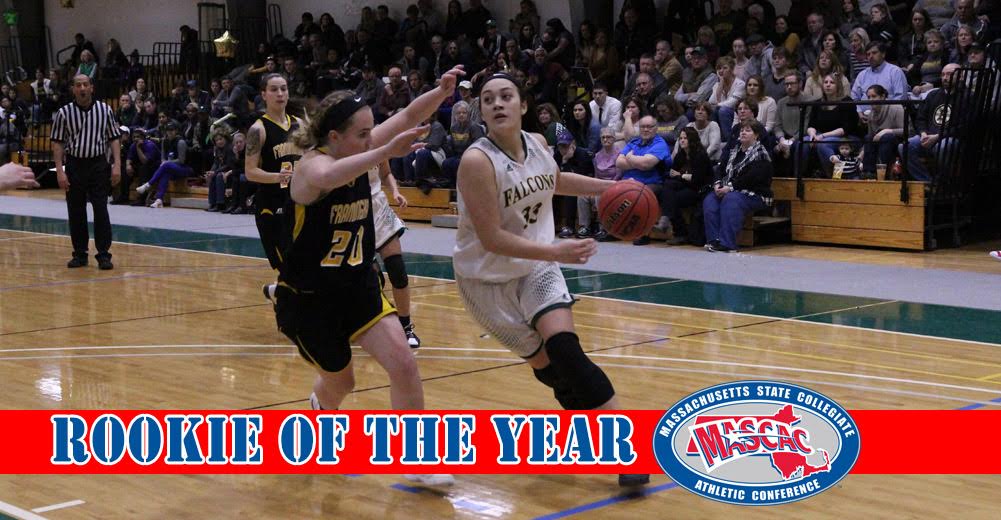 Kyra Rose, a freshman on the Fitchburg State Women’s Basketball team, has been awarded with the 2016-2017 MASCAC (Massachusetts State College Athletic Conference) and ECAC (Eastern College Athletic Conference) division three Rookie of the Year award. This comes from her many athletic accomplishments within just the one year she has been playing at FSU.

Rose is a 5’9 guard/forward who dominates the court in all aspects, from driving to the hoop to shooting the three. Rose is versatile in all positions on the court, which comes from her very high basketball IQ. At Rockland High school, Rose played point guard, which is very unusual for a person of her height in a high school setting. However, she still controlled the game with an average of 13.9 points, 10.5 rebounds and 4.8 assists per game. She also ended her high school basketball career with a total of 1,266 points in her four years, adding her name to the 1,000 point banner hung at her high school for many years to come.

Playing basketball was a big factor in coming to Fitchburg State, according to Rose. She commented that her other reasons for coming here was that she liked the campus and people, too. Her expectations for division three basketball in MASCAC was to “contribute to the team as much as possible and become a better player” by working harder and more consistently in the preseason to prepare, such as lifting, sprinting, dribbling, and shooting.

At Fitchburg State, she hasn’t been restricted to only one position in basketball. In fact, she has played all positions on the court, depending on who is out there with her at the time. When asked how the college game is different from high school, Rose said, “It is much faster paced, and people are a lot more skilled [in college].” However, this didn’t seem to phase her, as she averaged in her one year 19.5 points, 8 rebounds, 2 steals, and 1.3 blocks per the 30.1 minutes that she plays per game. She is then she’s ranked third in the conference with a total of 467 points, 91 assists, 49 steals, and 31 blocked shots.

Although Rose seems to be the full package athlete, she has strongly emphasized how valuable her team was to her and all of her success on the court with all of their encouragement to, not only her but to other teammates, as well, during practices and games.

After a 0 wins 25 losses season in the year 2015-2016 without Rose, she has been a huge benefit to this season. The Fitchburg State women’s basketball team ended their season this year with 9 wins and 16 losses.

In her coming years of playing basketball at Fitchburg State, hopefully the team will win a MASCAC championship with Rose. By the looks of how much Rose is scoring per game, it’s safe to say that she will have her name on another 1,000 point scoring banner by senior year at Fitchburg State. Until then, Rose hopes to “improve my game in all aspects, and for our team to be successful, especially in MASCAC.”