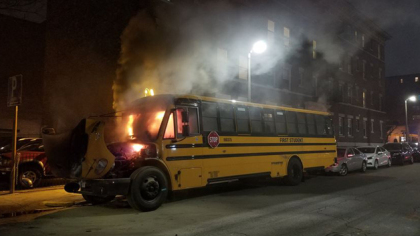 Fitchburg State students got more than they bargained for while attending the Red Sox game earlier this April when the bus that drove them caught on fire. About twenty students were attending a sports and entertainment recruiting career fair at Fenway park; the event was planned by the Business Society, a student government group on campus.

Students paid $17 for tickets to the career fair and the Red Sox game later that night. During approximately the seventh inning was when the school bus caught fire where it was parked on Kilmarnock St. by Fenway. Only the bus driver was on board and thankfully he got out with no injuries, the only victims happened to be the bus and the student’s possessions. Junior business major, Amanda Remie found her backpack with parts of the bus seat melted into it.

Dr. Renee Scapparone, a business professor, was the coordinator of the event and the person in charge. She was informed by the bus driver after he notified the bus company and his manager. There was already a lot of press in the area because of the baseball game, unfortunately, many students found out about the fire beforeScapparone could find where they were seated. Remie ended up learning the news from her Mom, “I found out after my Mom texted me and it was a picture of the bus on fire”. This caused a lot of confusion for the students as they found out about the fire and were concerned about their belongings butScapparone made a deliberate effort to keep everyone calm.

The professor has unfortunately been a part of two different house fires involving family members and used those experiences help her students. She said, “My responsibility was to keep calmness amongst the students. There wasn’t much we could do so we kept together as much as possible.” The group eventually made it back to the replacement bus and their charred belongings while the Sox were in extra innings. Scapparone described it as “emotionally unnerving” to walk out of the stadium and smell the remnants of the fire and to find most of their belongs burned

There will be an insurance claim filed and all the students will be reimbursed.  However, at the time of the incident, Scapparone was more concerned about the well-being of the students and made sure to check in on each and every one of them to make sure they were doing okay. When they returned to school well past midnight, the professor messaged all of them to make sure they got home safe. She is even in communication with the Fenway representative to get the contacts of the businesses at the fair for the students who lost business cards in the flames.

It was very fortunate that the only victims were material possessions, Scapparone and students were all thankful that the bus fire did not happen while they were driving and that the bus driver was not hurt. Scapparone reflected on how bad the incident could have been saying, “It really got you to think about how fragile life really is. Thank God we weren’t on the bus. I think that’s what got us over the anger of losing our stuff.”

Here is a link to the Boston Globe’s coverage http://boston.cbslocal.com/2017/04/05/fenway-park-red-sox-bus-fire/#.WOY50EHB6A9.facebook