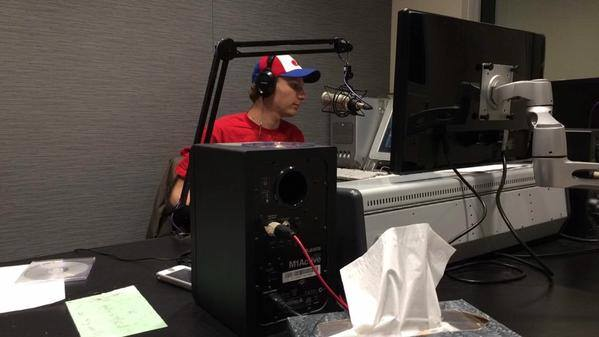 Tired of listening to the Top 40s? Can’t stand Taylor Swift and Zayn’s pop anthem? Sick of people thinking Lorde is alternative? Mitchell Neubert, the host of Mitch in the Fitch, offers listeners new and old music under the umbrella of rock.

As the clock is about to strike eight on Wednesday nights, Neubert’s fingers hover over the switchboard. He slides down the two dials that control “Dad’s” voice. “Dad” is what the radio club calls its main computer, which constantly streams music 24/7 on WXPL 91.3 FM. Simultaneously as Neubert fades out “Dad;” he fades up his original theme song. The needles on the switchboard thrash to the beat.

“MITCH! IN THE FITCH!!” the rock-inspired theme song shouts. Neubert nods his head to the theme as he scrolls looking for his first song. As the song is about to end, he presses the red button making his microphone live. He fades out his theme song and fades up his microphone.

“Hello everybody, I’m Mitchell Neubert and you’re listening to Mitch in the Fitch.”

Neubert is a junior Film/Video major at Fitchburg State. He joined WXPL his freshman year as a way to get involved on campus. Neubert comes from a musical background. He played the tenor sax in high school and even formed a short-lived band with his friends called “Dirty Ronnie and the Boys.” At Fitchburg State, he merged his love for film and music. While many film students often neglect and don’t pay much attention to sound design, Neubert’s passionate about it.

Mitch in the Fitch, as Neubert describes it, is “go with the flow.” As Neubert scrolls through his endless playlist looking for his next song, he said, “I play whatever I feel like.” From his personal favorite band, Foo Fighters to the classic “No Surrender” by Bruce Springsteen, Neubert plays any type of music “under the umbrella of rock.” That consists of rock, classic rock, punk, metal, alternative, and hard grunge. Between songs, Neubert gives his audience an update on what’s going on in his life. During one show, he updated his listeners about a film shoot he was on during spring break. After some songs, he’ll throw out a fun fact about the band that previously played. Neubert doesn’t sweat about trying to fill airtime with topics to discuss. He, like everyone else listening, just wants to listen to the music.

As Metallica’s “Wherever I May Roam” plays, Neubert sings along with the lyrics. His foot constantly hits every beat of the music. He can’t help but rock his head to the beat with his personal headphones on, “They’re more comfy,” he tells me referring to the cheap generic headphones in the DJ booth.

Neubert ends the show with Paul Gilbert’s “I Like Rock.” As he fades out the song he fades up Dad’s 24/7 voice. Neubert’s passion for music keeps him coming back to the DJ booth, “I like playing music even if no one is listening.”

Mitch in the Fitch airs live in Hammond on Wednesday nights at 8 on WXPL 91.3 Listen to it online at WXPL.com or download the app.