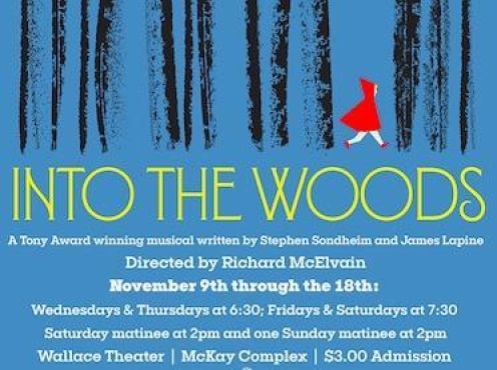 Laughter filled the McKay auditorium when the small redhead started wielding a knife. No worries, she is a professional wolf hunter – as of four scenes ago. Her name: Little Red Riding Hood.

On Nov. 8, the cast and crew of Into the Woods allowed any student or faculty member to watch an Open Rehearsal, and many people went. Excited students took up four whole rows and faculty took up two in the back.

Though they had a small set, the way they used it was brilliant. One student, Luke Shingleton, commented, “The cast is amazing. The singing and acting is quite incredible. 9/10.” Shingleton also said the Red Riding Hood was his favorite character, because compared to other performances, “[this Red Riding Hood is] actually childish, so when she uses the knife it makes it more funny than other performances I’ve seen.”

Another early bird viewer, Matt Peixoto, had also seen many versions of this musical and said, “The acting is spot on! The cast and singing are some of the best I’ve seen.”

Admission is only $3 per person! So make sure to support your fellow Falcons!