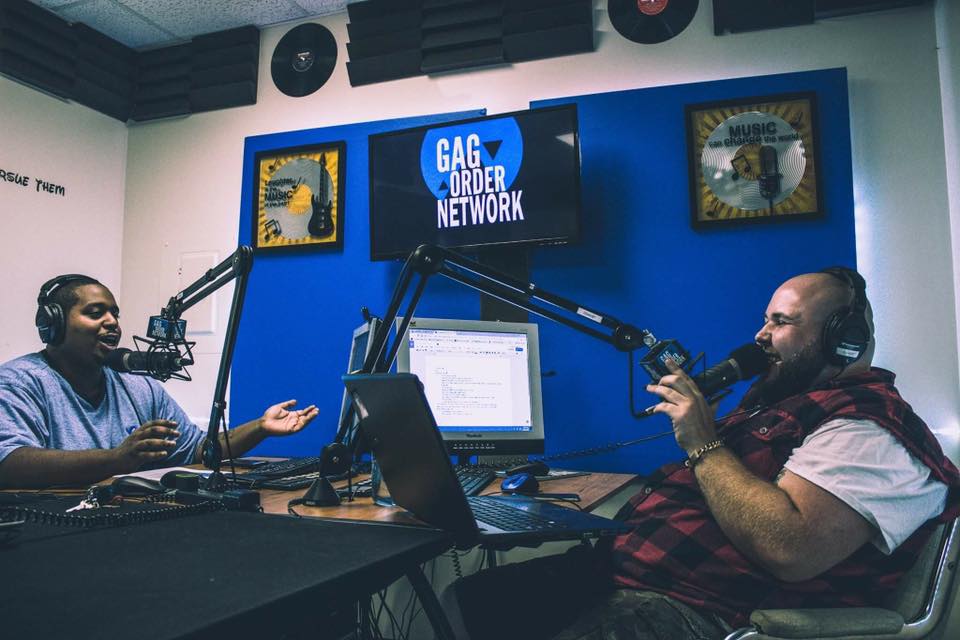 Ottie Mo (left) and Kevin Fitzmaurice (right) share a laugh in the studio during their live show on Aug. 30, 2017.

It was December of 2016 when Kevin Fitzmaurice crossed paths with Ottie Mo at an event on campus hosted by the Falcons Report, the sports journalism club. At the time, Fitzmaurice was the president of this club and was eager to recruit more student journalists, but who would have ever thought these two sports fanatics would ultimately pair up and launch “Ottie and Fitz Sports Talk,” their own unique radio show that aired on the Gag Order Network.

Both studied as Comm-Media majors here at Fitchburg State, but for a long time, they were unsure of what direction they wanted to go in. Fitzmaurice recalled moments in his life when he was searching for a passion.

“I never really applied myself to anything, and I got mediocre grades in high school and I just wanted to pass,” Fitzmaurice said. It was not until he transferred to Fitchburg State that he realized he had “the gift of gab” and a charismatic personality – a rare disposition, but one that aligned perfectly with Mo.

The two originally thought they wanted to pursue careers in film and video production, but in the back of their minds, they knew they did not belong behind the scenes. Everything seemed to change for them after Mo joined the Falcons Report. The duo clicked instantly, and by the time January came around, they would have their own sports show on WXPL 91.3 FM, the FSU radio station.

Mo describes their relationship as “the perfect match” because they are able to connect so well with each other. They root for opposing sports teams, but they use this to their benefit because it separates them from most of their competition. For instance, Fitzmaurice considers himself a die-hard New England Patriots fan, whereas Mo takes pride in his allegiance to the Miami Dolphins.

Their opinions on the NFL and sports, in general, made their hour-long segments fly by. The back and forth bickering and humorous commentary grabbed the attention of students around campus, and in March of 2017, they were awarded “Show of The Month” by WXPL. Fitzmaurice would graduate in May, but his relationship with Mo would only grow stronger. They were a persistent pair who continued to toil in hopes of fulfilling a dream – a mutual dream where they would become the new faces of the sports broadcasting world. With the skills they developed at Fitchburg State, Fitzmaurice and Mo would take their expertise beyond the sports journalism club on campus.

It was July of 2017 when they made their biggest decision together by signing on with the Gag Order Network, a Boston-based broadcasting company. Here they would go under the name “Ottie and Fitz Sports Talk” and start their journey, aiming to build an extensive audience by providing sports-related content and entertainment. Ottie and Fitz Sports Talk had a prime-time slot that aired on Mondays and Wednesdays from 5:30 – 7:30 PM, but you could also watch live episodes on Facebook. Unfortunately, the two have decided to part ways with the network this November. Fitzmaurice and Mo want to have full creative freedom. They want to run the show on their own, and even though it may be difficult, the two are confident and ready to take this next step in their journey.

“Ottie and Fitz Sports Talk” logo for their show. Courtesy of Rick Smoove

Their future will never be engraved in stone, but their bond is surely a “blessing” as they described and their chemistry is unquestionable. For that reason, they will go on to chase their dreams and will never settle along the way. They aim to build a sports empire, their own company where they can provide sports content through various platforms and build rapport with a larger audience. Kevin and Ottie do not care about the fame or the wealth that this career may entail; they have finally found their purpose and are more concerned with living a passion driven life rather than losing their happiness on the pursuit for more.