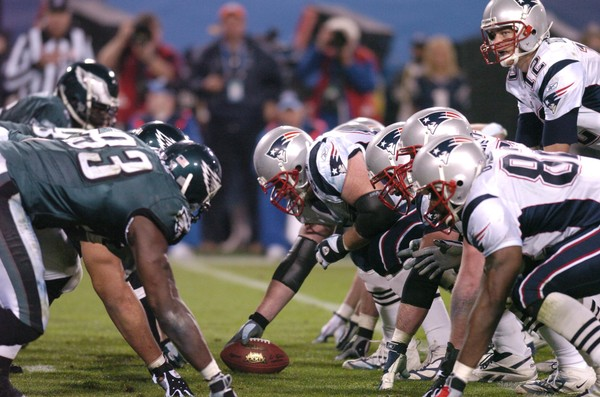 What has 115 million pairs of eyes, consumes 8 million pounds of guacamole, and only appears once a year? The buildup and outcome of America’s annual most-watched sports event boasts dominion of the winter months, as well as the morale of sports fans from all over the country. Football is a sport of high emotions for the players and fans alike, and the culminating game of the season featuring each conference’s greatest team is always cause for celebration in households across the country.

As a vast majority of Fitchburg State students are from the area, the New England Patriots are a clear hometown team for most people on campus. A defeat in weak one left even strong advocates of longtime favorite quarterback Tom Brady and mastermind head coach Bill Belichick a little dubious of their ability to lead the Patriots, an inevitably aging team, back to victory. As it turned out, the team was underestimated, and finished the season with 13 wins and 3 losses, tying three other teams for the best record. Their performance also earned them home-field advantage, giving them the opportunity to face their opponents in front of the home crowd at Gillette Stadium. As often as the Patriots leave fans satisfied after games in Foxboro, they are even more dependable when they play away, losing just once while on the road in the last two years combined. Although the Patriots are carded as the home team for the Super Bowl, the big game is actually being played in Minnesota, where much of Brady’s family grew up.

The Patriots are set to face the Philadelphia Eagles, a team that, despite losing their upcoming star quarterback Carson Wentz to a season-ending ACL tear in week 14 of the regular season, rallied behind backup (and former starter) Nick Foles and collected two victories in the playoffs, the most decisive of which came against the young Minnesota Vikings. The team has been pristine on capitalizing on red zone possessions throughout the season, featuring wide receiver Nelson Aghalor and running backs Jay Ajayi and Legarette Blount. Blount is a name that even casual Patriots fans will remember as a major proponent for New England in their playoff run last year en route to their historic comeback victory against Atlanta in last year’s Super Bowl. Now that Blount is on the opposite side of the field, it is up to New England’s defense, which has been spotty this year but has slightly improved as the season has progressed, to come up with the answers to stop these forces, facing arguably one of the best offensive lines in the league. The Eagles also have an extremely powerful defensive line, applying pressure on quarterbacks on a staggering 41 percent of pass plays this year. It will be up to Tom Brady to find open receivers in the likes of Danny Amendola, who has been very successful, as well as Brandin Cooks and tight end Rob Gronkowski, who is just returning from a concussion, to guide them to victory. If it appears that this game is not going to be an easy victory, it is because it will likely not be; the Patriots have done more with less this year despite losing receiver Julian Edelman before the season began, as well as some key defensive injuries scattered throughout the season, but so have the Eagles since Wentz’s season ended on December 11.

On the outside of the playing field, there has been a lot of discussion on a range of topics in the playoff season, as seems to be commonplace among contending teams when they are at their hottest. Annual discussions of Brady’s inevitable retirement have flared up, and the 40-year-old quarterback has all but dismissed them, joking, “Why does everyone want to see me retire? I don’t get it.” The incessant rumors come at the heels of Brady canceling an interview upon a radio personality calling his 5-year-old daughter “an annoying little pissant.”  The drama proved to be a distraction, with the Patriots’ nail-biting comeback win against the Jaguars, who had ensured a Super Bowl win prior to their defeat. Interestingly enough, Jacksonville’s previous opponent, the Pittsburgh Steelers, had also guaranteed a conference championship victory against the Patriots, but due to Jacksonville beating the Steelers in the divisional round, that promise was never tested.

The Eagles have also had their fair share of skeptics this season, especially after Nick Foles was named as the replacement. Foles, who celebrated his 29th birthday the day prior to his offense’s rout of the Minnesota Vikings two weeks ago, was a starting quarterback for Philadelphia for the better part of three semi-successful seasons from 2012 to 2014. The teams, despite both being regarded as two of the most historically successful in NFL history, actually have two separate tales. The Patriots are contending for their sixth Super Bowl in franchise history, including their third in the last four years. If they are successful, it will be the second time since the turn of the millennium that they will accomplish this feat. Meanwhile, Philadelphia has not yet won the big game despite playing in two Super Bowls, the last of which is a close loss to New England at the conclusion of the 2004 season. With Brady earning Super Bowl MVP that game, nearly a decade and a half ago, there are sure to be repressed memories from fans and players alike.

As much as New England’s fan base prides themselves on being the team the rest of the league loves to hate, the Eagles have a justifiably confident fanbase as well. Although the game is being played in Minnesota, fans of both teams will surely be attending the championship game. The Patriots fan base is confident in their stars’ ability to overcome all adversity, as they have for the last two decades, and the Eagles have always been players’ least favorite place to play, as they scoff at the city’s nickname “The City of Brotherly Love.” While neither team’s fanbase is particularly modest about their team’s achievements, the respective teams and their coaching staff are always as reserved as can be, letting their accomplishments play out on the field rather than in interviews and tweets. As of Friday evening, the Patriots are a five-point favorite in the game according to betting odds, and Gronkowski, a target of a large number of Brady’s throws, has been cleared from the league’s concussion protocol and will definitely play Sunday night. But there is a reason the game is played, and in a battle of two prevailing teams capitalizing on their opponent’s very few weaknesses, the victor will surely have to have played a near flawless game.

Students who are on campus on Sunday night can enjoy the game with some company in the Falcon Hub starting at 5:30, roughly an hour before kickoff. The event will be hosted by Fitchburg State’s Office of Student Development and will feature free food as well as prizes.