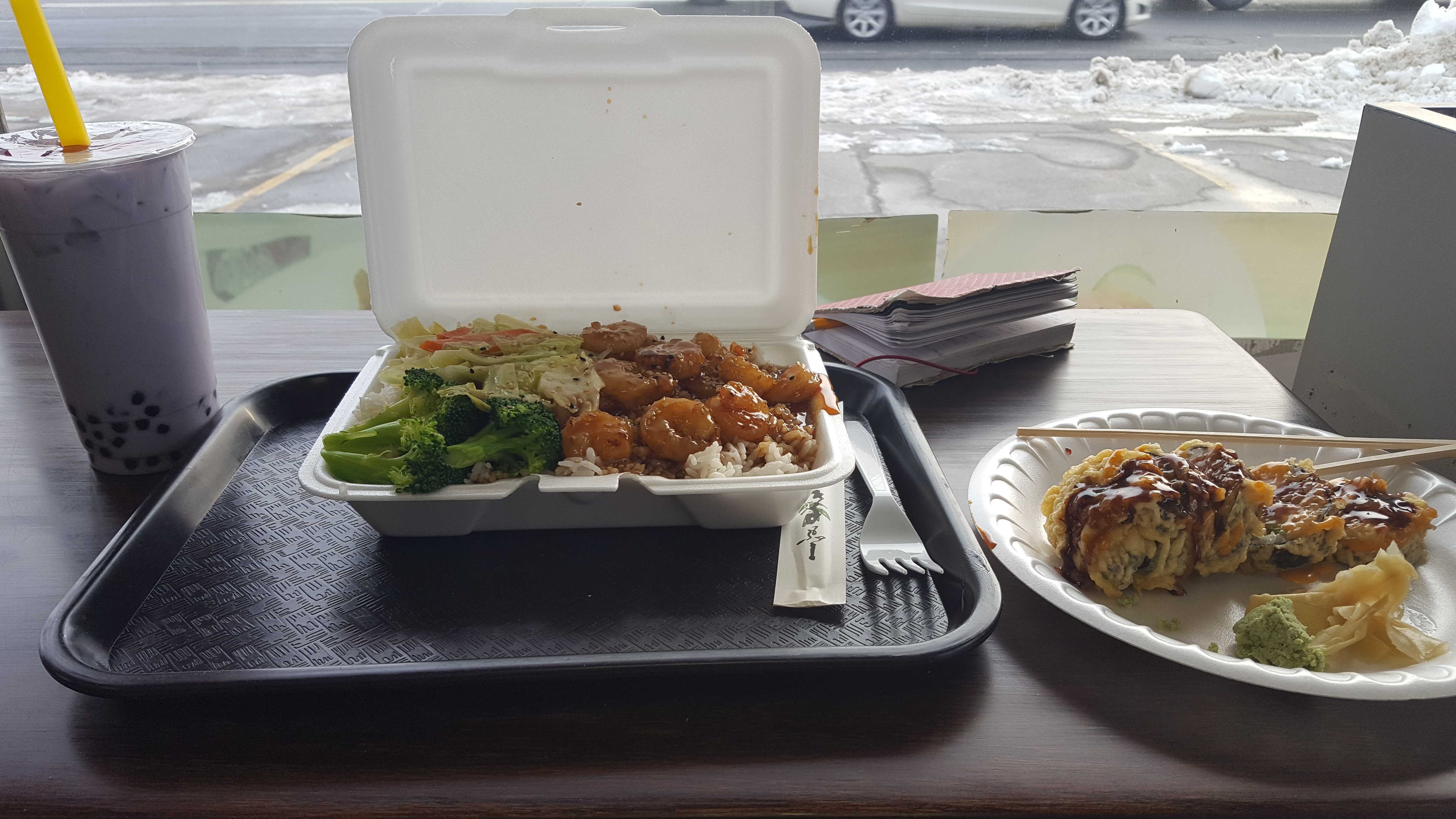 Sawa is a new Asian restaurant located at 336 Summer Street and is open every day but Tuesday from 11am to 9pm except Friday and Saturday where they are open an hour later until 10pm.

They opened last year and I finally discovered them this semester. The menu is set into whiteboards and on panels facing downward from above the counter. I ordered myself at the counter, selecting teriyaki shrimp with a sushi roll called crispy eel, and taro bubble tea. Sitting on the stools, I could look outside while I waited for my food. You could see the cars race by on Summer Street toward the lights, as well as look across to the parking lot, where one can see Dutch Kitchen, or looking further up to the light there is a bright orange Little Caesars sign. In addition to being quite easy to find a time where they are open, they also deliver which is a great boon to anyone who doesn’t want to drive or walk down to Summer Street.

The menu is quite expansive, having more traditional features such as beef teriyaki, which is quite a common dish at places that people tend to call Japanese or Chinese. They also have appetizers such as Crab Rangoon, which one can get at almost anywhere that serves Americanized Chinese food. However, unlike those places, they have a series of dishes called poke bowls as well as sushi burritos, something that Sawa has on their menu that I personally haven’t seen before.

Poke bowls, also called raw fish salad, come in four varieties at Sawa but all have some sort of fish or shellfish, and either fruit or vegetables. I did not try one when I was there, but it is an option for those that are interested in such a dish. The sushi burritos are exactly what they sound like: a burrito that, instead of being made of tortilla, is made of dried seaweed- or nori- and rice, like a sushi roll. I have not had the chance to try that quite yet, but it is certainly something to try on a return visit.  Outside of Boston, finding bubble tea is hard, so that is another plus to their menu. They also serve alcohol for those old enough to have it. They have free miso soup for the meal if one is inclined to have it.

The atmosphere is a mix between a coffee shop where they have plenty of places to sit and just eat by yourself, coupled with a sandwich shop vibe where you go in, get what you want and head home or to work and eat there: quick and easy, but quiet enough that one can sit and relax while watching outside or getting work done. When I went, it was quiet, but that might be due to the time when I was there- during the afternoon- as it might pick up later in the evening but as I have not been there during that time I’m not sure. I had already been to Sawa once before. I immediately found that the food was delicious: it reminded me of a Japanese takeout place that I had been to when I was young. It was a nice change from home, where good Asian food is hard to find, so I had a good reason to go back for a second time, giving me a chance to try something different as I only got sushi the first time.

After getting everything and sitting down, I got to really see what I got.

The teriyaki was well made- whatever they use for the sauce was a good mix of savory and just a hint of sweet that it should be. The shrimp mixed with rice and veggies were well cooked and if they weren’t supposed to crunch, they didn’t.

The sushi was a bit odd- huge pieces compared to how a more usual piece of sushi is. They were fried on the outside with a disk of rice with the contents inside (in this case eel and a couple types of veggies) with a slightly spicy mayo and eel (or unagi) sauce on top, to create a bit of a kick with a savory finish, which made them delicious if surprising.

Finally, there’s the bubble tea, which was taro, a flavor that was picked in the spur of the moment off of a list that is 22 items long. The taste was a sweet milky one. The sushi surprised me so I was unable to finish it, but it was a nice meal for a late afternoon lunch.

Sawa has a great atmosphere coupled with food that is well made and a good price for the amount and quality. I have already told a few people about it and they were interested in trying it as well. The only problem is that parking is right on the street so getting in and out of the lot is sometimes hard with the intersection so close. Overall Sawa is well worth your time if you enjoy sushi, Chinese or maybe something a bit different.