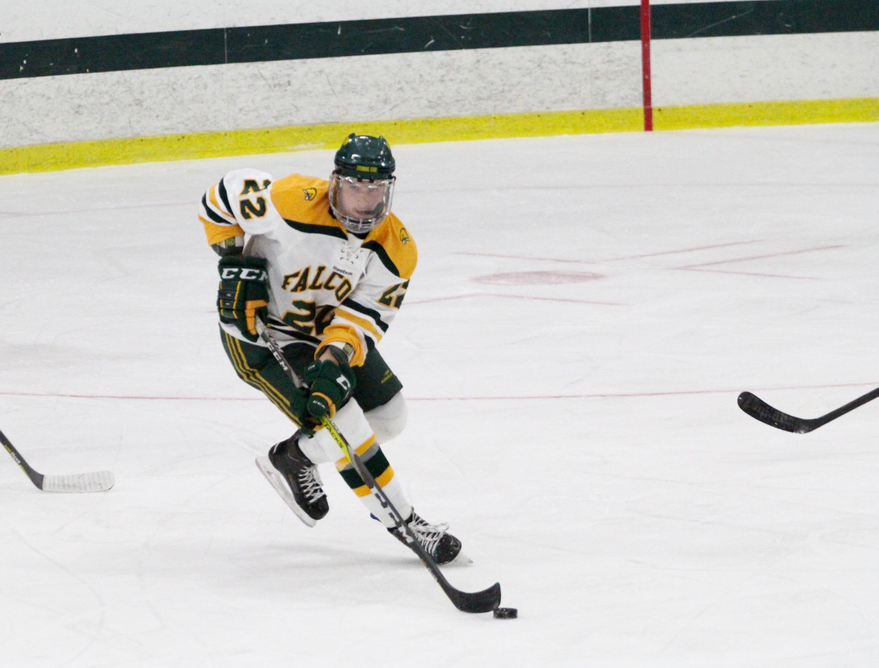 When you look at Fitchburg State’s hockey captain James Gordon he seems like a regular guy, but what you wouldn’t know is that he’s been through more than most 23-year-olds have.

Gordon was playing hockey at Hingham High School and was having an excellent season during his senior year, but knew something was not right with himself. In March 2012, he was playing street hockey with friends and started throwing up blood. His mother took him to his pediatrician who recommended he go to a specialist. He got numerous tests done, not being told anything that was going on.

He then met with the specialist and at just 18 years old, Gordon was told he had stage 3 testicular cancer.

He went home and had a family meeting and to tell the rest of his family the news. Being the oldest of 4 kids, he tried to be strong for his family, making sure that he would beat this.

Not long after, his whole high school hockey team found out and went over to see him, and some even made bracelets saying “JG17 #Pride” to show their support.

Soon after, Gordon had his first treatment, had a surgery, and was given a port for chemo. His treatments were 2 weeks on and 1 week off for 3 rounds.

“When I was diagnosed at such a young age of 18, it gave me a different perspective on life and what is important and to not take your health for granted,” Gordon said.

He also explained how getting cancer during the end of his senior year made him miss out on the fun end of senior year activities such as prom, graduation, and going off to college because he could not do much.

“A big thing that affected me was being bald and everyone knowing that you’re sick and looking sick, it’s not like you can just go out there and hide it, it’s a tough thing going from being strong and athletic to weak and bald,” he said.

Though he missed out on some of his senior activities, he had overwhelming support from the hockey community, getting a phone call from professional hockey and former Boston Bruins player Phil Kessel, who himself, is a testicular cancer survivor.

Another former Bruins player, Bobby Orr, who could be considered one of the greatest hockey players of all time, visited his Hingham household. He went to a number of professional hockey games around Massachusetts and received signed jerseys and get well wishes. They also helped raise money for him.

It took Gordon six months to be declared cancer free, and by August 2012 he had lost 40 pounds. By October of that year he finally got back to playing hockey again for a U18 youth team Boston Advantage, but it still took a long time to recover.

By March 2013, he was fully back to his original weight. That fall he went to Plymouth State and tried out for hockey as a walk-on and was cut from the team. He left Plymouth to play a semester of junior hockey with the New England Wolves and then was recruited by Fitchburg State.

He became a member of the FSU hockey team in 2014 and at the end of his sophomore season he was named the team’s most improved player.

This past August he was officially declared five-years cancer free. Now he is the team’s captain and he says, “I’m living out a childhood dream of playing college hockey and enjoying the people I’ve met. I’m humbled to be one of the faces of Fitchburg State hockey seeing that this would have been highly unlikely five years ago when I was diagnosed”.