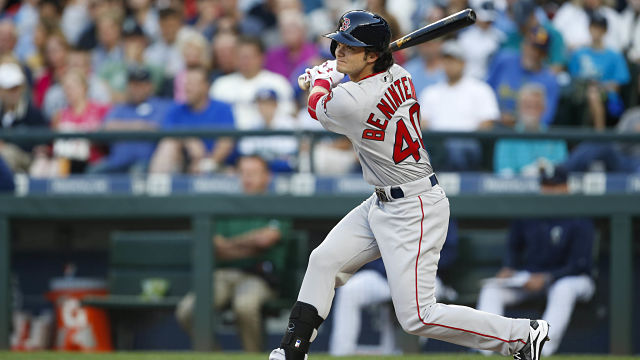 The smell of sunflower seeds and peanuts flows through the air, and the shrill, machinated organ sound of the “Charge!” song plays over the speaker. Cracker Jacks are tossed by yelling salesman; grinning children hold out gloves much too big for them in hopes of catching a fly foul ball; cans of black paint are opened and spread under players’ eyes to combat the glare from sunlight which will soon be blaring over the fresh cut green field.

Regardless of the snow that reared its ugly head earlier this week, all over the country, there are fans excited about their team’s early success (or discouraged by their April shakiness). While it is somewhat true that teams can balance themselves out midyear and become an unlikely powerhouse to make a championship run, the first few weeks of play can be very telling and set the tone for the remainder of the season. The Red Sox have a lot of promise for the 2018 season with few weaknesses, but their strengths have a lot of staying power for years to come and will be a major positive for this entire season.

The Boston Red Sox are in the process of redefining themselves after last year’s disappointing playoff loss, in which old manager John Farrell was fired and new manager (and former player) Alex Cora was brought in as his replacement. This is Cora’s first head coaching position, but he was a bench coach for the World Series-winning Houston Astros last year. Although seemingly youthful in his practices, Cora brings the dynamic of an experienced veteran who competed not long ago to the team, as he spent thirteen seasons for six different teams and just retired in 2011.

Cora will join and guide a team that is in surprisingly good shape for having just fired their manager the season prior. The Red Sox won 93 games and lost 69, earning a playoff berth with a primarily young team. Most notable is the emergence of new stars in two outfielders: left fielder Andrew Benintendi and right fielder Mookie Betts each reached 20 home runs (modest numbers compared to the championship days of Manny Ramirez and Trot Nixon but still impressive nonetheless) and alongside shortstop Xander Bogaerts were in the top three in every batting category the team has, including recorded runs. Most interestingly, Betts and Bogaerts are each just 25 years of age, with Benintendi being just 23. This may translate to many years of even further growth and promise of advancing already solid fielding by all three players.

On the pitcher’s mound, things are looking up as well. Ace pitcher Chris Sale was a finalist for the prestigious Cy Young Award in 2017, recording 17 wins and an Earned Run Average of 2.90. Second in the rotation is Drew Pomeranz, who had a spectacular year of his own in 2017, also recording 17 wins. 2016 Cy Young winner Rick Porcello is also ever-present, providing the Red Sox with a solid first three games of a five-game cycle. Hector Velazquez and Brian Johnson are both also coming into their own to round out the starting pitchers, but it is the bullpen and relief pitchers, who will need to step up: their uncertainty glared in Opening Day’s crushing 6-4 loss against divisional rivals, the Tampa Bay Rays. In that losing effort, the bullpen allowed all six of Tampa’s runs in the eighth inning despite Sale’s very strong showing in his start. The Red Sox will either have to enhance their strengths so that they overcome their few weaknesses or find some powerhouses for their late-game relief in the form of trades or from their minor league talent.

Since the disappointment of Opening Day, the Red Sox did not lose a game for the rest of their first week. They currently lead their division with a record of 8-1 and swept their home opening series against the Rays at the beloved and illustrious Fenway Park. This, along with their games against their bitter rivals, the New York Yankees, will truly set the atmosphere for what hopes to be a taunting comeback to their loss last season. If the Red Sox can hold strong against their divisional opponents, that will be a sign of brighter days to follow, and a warning to the rest of the league. Despite their success, it is important to remember to not raise hopes too ambitiously based on the first week, but an early division lead is still something to smile about.