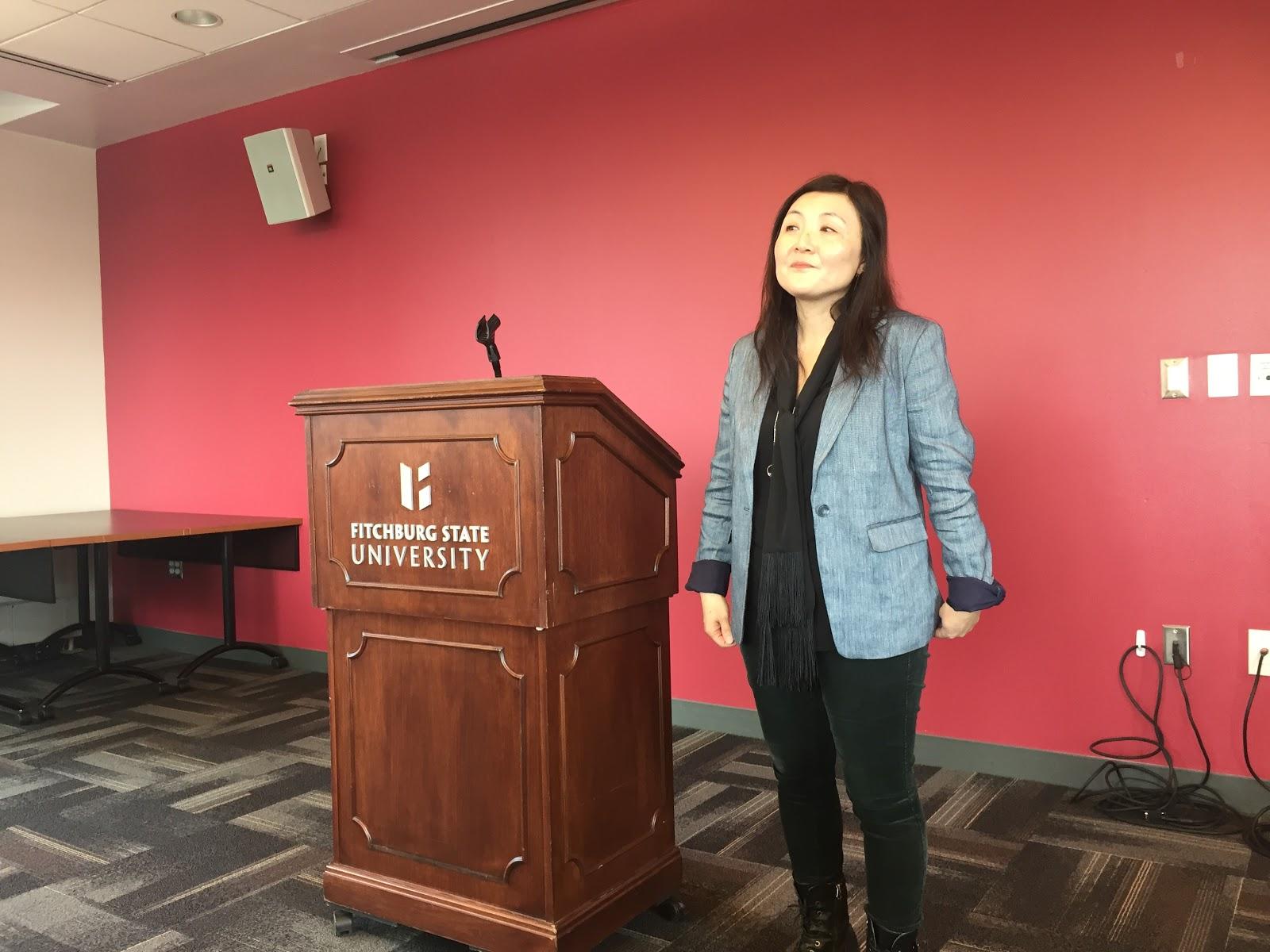 Author Jimin Han didn’t start out with intentions of writing, let alone becoming a novelist but in the end, it became part of who she is.

Last Wednesday, March 28th, Jimin Han got in her car and traveled the 3+ hours from her home in New York to Fitchburg State University to read from her new book “A Small Revolution” and to share with students her journey of becoming a writer.

The room was already abuzz when Han entered and students sat eagerly awaiting whatever advice they could soak up. What they didn’t expect was Han’s backstory and the pushback she received along the way.

A novelist and writing professor at The Writing Institute at Sarah Lawrence College, Han reflected back on her days in undergrad struggling through courses like philosophy and astronomy (taken only to appease her parents) but was eventually called to writing.

The year before Han had attended college at Cornell, there had been a hostage situation and shooting on campus in the very dorm she would end up living in. While we see unfortunate events like this fairly often in our current societal climate, this was rare occurrence prior to 1985 and social media had yet to exist. Though she tried, Han couldn’t shake the event from her brain and as it sat in the back of her head, it grew.

The noise around this event and everyone’s own ideas about what happened interested Han. Han explained that something in her identified with the feeling of paralysis that must have been in the room and she wondered what it must have been like for them being trapped in there. While this event inspired Han, that is where the similarities end. She didn’t want to write a journalist account of what happened. Her novel does not in any way resemble the actual incident at Cornell.

“A Small Revolution” is a story just as complex and interesting as it’s creation through the eyes of Jimin Han. Han uses numbered sections, reminiscent of segmented fiction, to provide seamless transitions between a dorm room hostage situation and the chaos of pre-democratic South Korea.

For Han, an important part of writing is where stories come from and discovering pieces of a puzzle to create that story. The summer prior to attending college, Han went to Korea and witnessed much of the student protests for workers’ rights. These extreme situations that weren’t being covered by the US and global media helped to shape the flashback moments shown in the main character, Yoona’s mind, and mark an important part of history.

Han’s also spoke about the hardships faced during the editing and publishing process and shared her first-hand experience with prospective writers. It seemed that most publishers were looking for a particular kind of Asian-American story that had become popular and “A Small Revolution” just wasn’t that. For Han, it wasn’t about what was popular from Asian-American writers, but what would speak to someone like her cousin and those like herself. The point of writing the book was to better understand what may have happened during a significant time in South Korean history.

Eventually, after a lot of work and sequence revisions, a young Asian-American editor decided that she wanted to publish the segmented version of the book and things finally came together for Han. Han says “It’s not because the book was good or bad, I met the right editor for me and the book got published.”

Writers should use Han’s story and advice as a reminder that rejection should not discourage us. The key is to keep working and know what business relationships work for you. For Jimin Han, things eventually lined up- and sometimes it’s all about timing. Han says that as writers, it’s our job to hear feedback and figure out how to change the story in ways that work for us.

We look forward to reading Jimin Han’s next novel and strongly recommend “A Small Revolution” to those looking for fast-paced realistic fiction that immediately envelops you in the story and keeps you asking for more.

Han’s book can be found here!