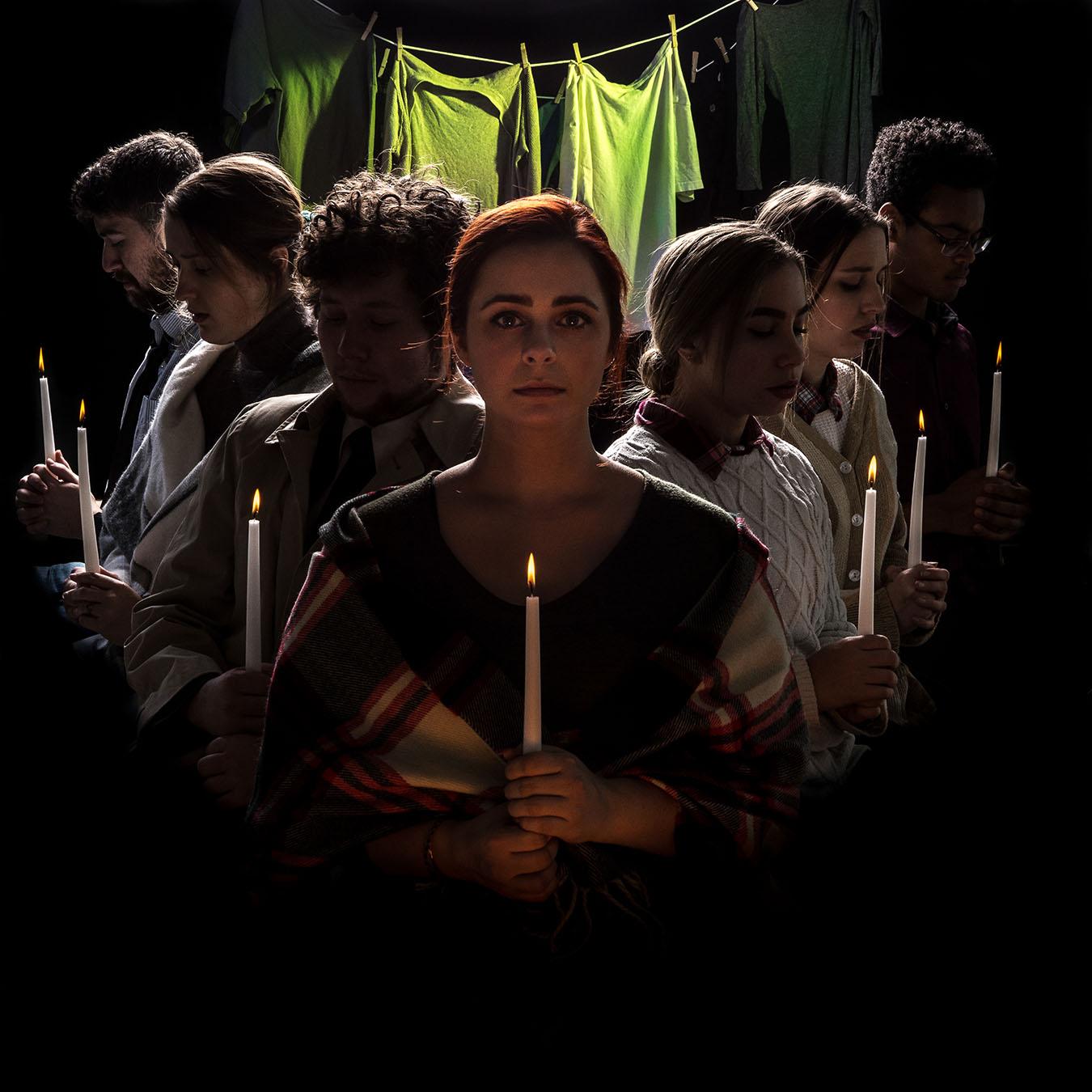 Fitchburg State University’s production of “The Women of Lockerbie,” by Deborah Brevoort (running from April 11 to 21), is an emotional play with riveting performances from members of FSU’s Theatre Program.

If one is to walk towards the entrance of the theatre, they will be immediately immersed in a historic atmosphere. Audience members have the chance to take in the replicas of the objects that went crashing to the ground when Pan Am flight 103 devastatingly exploded over Lockerbie, Scotland on December 21 of 1988. On the walls, and on a white-clothed table, are framed photographs of the individuals who lost their lives, as well as a video running that explains the process and details of creating the space.

The setting before the darkened theatre absolutely sets the mood and encourages a knowledgeable, yet quiet spectator. Upon taking their seats, theatre-goers face a dimly lit stage with actors cast as members of the “Echo Chorus”, who lie completely still throughout the entirety of the play. At first glance, they seem as if they aren’t actors but props. With few instances where they are summoned to move and stand, one is alerted that they in fact are actually alive. Staying true to their name, these actors make collective noise at certain points, muttering the names of the dead and moaning. Serving as “spiritual support enhancing the aural and scenic atmosphere of the journey,” as Director Kelly Morgan says, the never before added Echo Chorus gives the production a heart wrenchingly beautiful touch.

Seniors Justin Katz and Brittany Messuri give a wholehearted performance as the production’s married characters Bill Livingston and Madeline Livingston. In search of any trace of their son on their trip to Lockerbie seven years after the tragic event, the two exemplify the unimaginable loss of a loved one. The couple is two sides of the same coin: a mother/wife who is  grieving over her son, and a father/husband who has continuously sheltered his grief in an attempt to carry his wife forward. Katz and Messuri undoubtedly give the audience every ounce of chilling emotion as they go through their journey.

Olive Allison, played by Lauren Esper, and the other women of Lockerbie serve as emotional crutches for each other, as well as offering their aid to Bill and Madeline Livingston. While these women deal with their own grief, they extend open ears and whatever they can in the form of words. Sticking together throughout the entirety of the play, these women reveal their own personal stories and the people dear to them that they have lost. In many ways, they serve as a reminder to the American characters that they are not the only ones who have experienced crippling loss. The women of Lockerbie are the ones who faced the damage firsthand and use their stories as a way to not only avoid denial, but to show the others that they are not alone in their struggles.

While this play can be serious and emotionally striking, there are perfectly placed points of comic-relief. Around mid-mark of the performance when audience members start to get a bit drained, they are welcomed with the perfect dose of humor. Junior Charlie Barbera, playing George Jones, and junior Nina DiRusso, playing Hattie, both come onto the stage and bring laughter with them. This is a boost and definitely helps onlookers power through the rest of this gripping play.

The production as a whole is an informative yet compelling piece of art. There are ways audience members can relate, love and hate each character in the play, making this production definitely one to see. It is not only about buying a ticket to go see a play, but about raising awareness of a historical tragedy that deserves to be remembered not as an act of hate, but where love triumphed.

From August 4th to the 18th, the cast and crew will be taking an abbreviated version of this memorable production to the world’s largest arts festival: The Fringe Festival in Edinburgh, Scotland. On their trip, they hope to visit Lockerbie.

Please note that the play has some material that may not be suitable for all audiences, along with loud noises and flashing lights.