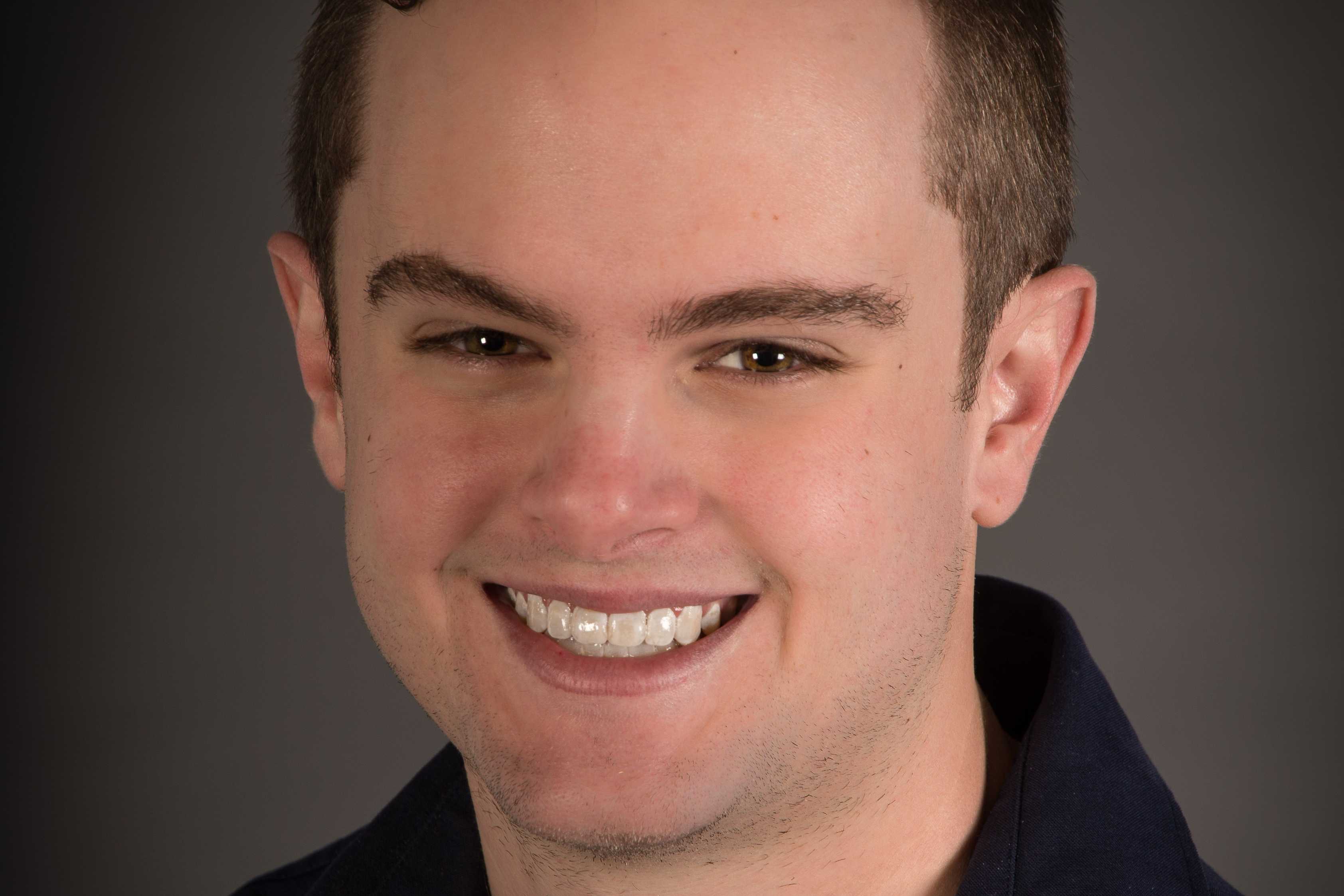 Senior theater major Tyler Rost is steadily paving a path to pursue his passions. They usually involve a camera, but regardless of which side of it he’s on, he’s leaving his footprint at Fitchburg State University.

Originally from Eastham, Massachusetts, Tyler ended up at Fitchburg State by chance. After a year as a film student at UNC Wilmington, Tyler had to find a school closer to home due to a health issue. Although he loves making and producing films, he was looking for a school with a theater program. He was ready to get in onstage and in front of the camera.

As a theater major, Tyler is, first and foremost, and actor. He’s been in numerous shows and films at Fitchburg State. “I feel like I’ve brought a lot to the community in terms of when I’m onstage, acting,” he says. “As an actor, any time I go on stage I’m bringing out some sort of original idea. No matter what the character you play, you still have to make it your own and make it unique to you.”

Most recently, Tyler was an understudy for Fitchburg State’s Main Stage Theater Company’s Women of Lockerbie, which, he says, was a powerful experience. Two of the shows during the two-week-long event were performed by the understudies, resulting in an entirely different cast. “There’s a total different feel to [the show],” he says. “It’s surprising how much a show changes when you just change up the people.”

Tyler’s biggest obstacle as an actor has been severe dyslexia. One of the core responsibilities of an actor is reading scripts and memorizing lines. “If a read [a line], I could read it a hundred times and still not remember…that’s been the biggest professional obstacle with school and with acting,” he says. But, as an inherent creative, Tyler has managed to turn that obstacle into one of his greatest strengths.

“I just read my script out loud,” he says. “I’ll record it and listen to it on tape.” This has proven itself to be more than just a memorization strategy. By listening to himself reading the script, he notices where he mumbles, where he needs to work on his diction and articulation. “It takes a little more time, but it works,” he says. Ultimately, he has crafted a way to overcome an obstacle and become a better actor at the same time.

Tyler used to get nervous on stage and in front of a camera, but theater professor Kelly Morgan taught him how to use those nerves to fuel excitement. “It’s a vulnerability to have people watch you and judge you,” he says, “and my goal as an artist is for my art to start a discussion.”

Kelly Morgan has been a major influence in Tyler’s budding career as an actor. He doesn’t sugarcoat his feedback, so Tyler is always sure that he’s hearing nothing but the truth. “I really respect that honestly, and that honesty really helped me become a better actor, and I guess a better person, too,” he says.

This honesty has given Tyler the confidence and inspiration to pursue his MFA, so grad school has become a goal to work toward. In January, he attended the URTAs, an audition in front of 75 different grad schools and resident theaters, . “[It was] really fun and horrifying at the same time,” he says. His talent earned responses from almost a dozen schools.

Tyler plans to move to Boulder, Colorado in the fall to earn his MFA in Contemplative Theater at Naropa University. Having grown up on the Cape, he loves New England and can see himself coming back one day.But, he says, “right now is the time, if any, to try to go somewhere else. And why not Colorado?”

The next goal Tyler has set his sights on is a career as a professor and a professional actor. Eventually, Tyler aspires to pursue his passion as a filmmaker by opening his own production company.

Tyler has already jump-started his passion as a jack-of-all-trades for the Athletics Department. He does a little bit of everything—making videos, producing, directing, commentating the games, and webcasting. This versatility is going to come in handy as he pursues his MFA. “I really enjoy my work with the Athletics Department,” he says. “They’ve been crazy supportive of me, giving me the opportunity to create what I want to create.”

Tyler has been in charge of promoting DIII Week at Fitchburg State for two years. Last year, he went above and beyond to produce a different film for every day of the week instead of the one film the department was expecting. This year, he did the same. “I think the products that I create are really good for the university,” he says. Not only has it been a great way to promote Fitchburg State Athletics and Fitchburg State as a whole, but it has also been great experience and exposure for Tyler as a filmmaker.

Another passion Tyler feels fortunate to pursue, is music. Of the seven instruments he has taught himself to play, bass is his favorite. He performed in the Musical Theater Club’s rendition of American Idiot in March, balancing rehearsals for that with Women of Lockerbie rehearsals, work at the Athletics Department, producing and acting in films, taking four classes, and applying for grad school.

“It sounds like I’m doing a lot, but I could be doing more,” Tyler says. No matter how much he takes on, Tyler will always seek out and take on new opportunities—it’s in his nature. If he’s not busy, he’s not happy, and that’s what has driven his success.

Tyler still manages to find some free time here and there. He’s a Bruins fanatic, so catching the games is one thing he always makes sure to carve out time for. He’s also a firm believer in prioritizing self-care. He’ll hike and enjoy nature or blast music and get lost on back roads in the car to unwind and decompress. “It’s about having that sacred time in the day for yourself,” he says.

Tyler would advise students who want to get involved to push themselves; take that first leap into one activity and go from there. “It kind of snowballs after you try one thing,” he says. He was hesitant to try new activities and events at his old school, but once he joined his first group at Fitchburg State, opportunities began landing in his lap. “Try it. Worst thing that happens is you fail. So what? Pick yourself up and try it again some other time. How are you going to learn if you don’t fail a few times?”