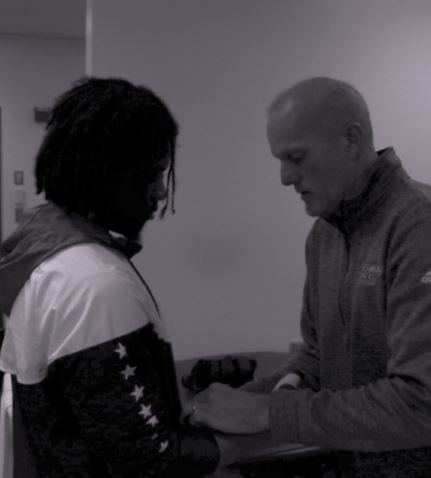 Fans of Fitchburg State Athletics know all about their favorite teams and players. What they may not recognize is the sideline support that keeps them safe. Athletic trainers ensure that athletes are primed to avoid injury before, during, and after games.

At Fitchburg State, Rebecca Shersnow and Jordan Orrell work with head athletic trainer Todd Souliere to ensure that all athletes are kept healthy and ready for game time. They spend countless hours with injured athletes to make sure they are getting the proper treatment and even more hours with teams during practices and games to ensure that if an injury occurs, a certified trainer is available.

While athletes often bask in the spotlight – those who keep them there often work from the shadows. Shining even a small light on them reveals a crucial aspect of the success of Fitchburg sports teams. Trainers sometimes work seven days a week, depending on games and practice schedules. Souliere is at the Recreational Center treating previously identified injuries from 11 am until 3 pm, daily. Then, it is off to the field for practices. If its game day, they are preparing athletes up to a couple hours before game time. According to Shersnow, during preseason, for fall sports, the trainers work from 6:30 in the morning until 9:30 at night. Once classes start, they are on the clock from 11 am until last practice, which could sometimes go past 10 pm.

“I find many times that I’m at work more than I’m at home,” said Todd Souliere, Head Athletic Trainer at Fitchburg State.

Souliere has been with Fitchburg Athletics for 18 years now. The Vermont native grew up very involved in sports. He played soccer, baseball, basketball, and golf. Souliere became interested in the athletic training field when his sister first enrolled in a physical education program at Castleton State, in Vermont. He played soccer in college, at Lyndon State, now Northern Vermont University, but in his freshman year, he tore his ACL. This injury, along with an introductory course to athletic training, lead him down the path to becoming an athletic trainer. He graduated from Lyndon State College with a Bachelor of Science in physical education and athletic training. He then went on to complete a two-year graduate program in 1998 at Springfield College, to receive a Master of Science in sports injury prevention and management. One of the highlights of Souliere’s career is when he was at Springfield College, where he was able to join their men’s soccer team and travel to Hong Kong, China, to visit their sister school and compete in a series of exhibition games over two weeks.

Outside of being FSU’s head athletic trainer, Souliere enjoys racing motorcycles on pavement. In the summer he does a seven round series of races on the weekends. They begin in April and go through October. Each round of races is held once a month, with the exception of this year having two rounds in the month of September. Over the past few years, he has taken up flat track dirt bike racing over the past few years.

Trainer Rebecca Shersnow is also starting her 18th year at Fitchburg State. She is originally from Templeton, Massachusetts and now lives in its neighboring town of Phillipston. She grew up in a close family, and she has always been involved in sports. She was first introduced to athletic training when she got hurt playing field hockey at UMASS Amherst. At the time of her injury, she was interested in a career in Archaeology. She then decided to transfer to Castleton State to get her Bachelor of Science in physical education where she graduated in 1996. From there, she went on to earn her Master’s in kinesiology with a concentration in sports studies, at the University of New Hampshire, in 1998. To obtain her degree, she had to complete 1500 hours of clinical work. Following her certification, she worked at North Middlesex Regional High School until she got the offer from Fitchburg State.

Shersnow works with the Ice Hockey team six months out of the ten-month academic year. In the Fall she works primarily with Football and Field Hockey and in the Spring she works with Softball. The worst injury that she has ever seen is when a men’s lacrosse player got up-ended over the net and landed on his wrist, breaking his radius and ulna bones and dislocating all the bones in his wrist. She recalls riding in the back of the ambulance and witnessing the procedures that required to fix the player’s wrist.

When off the field Shersnow, she enjoys reading British history books and studying the stars. She loves to travel and has been to Orkney, Shetland, Ireland, Italy, and London, England.

Jordan Orrell recently joined Souliere and Shersnow as the third athletic trainer for FSU in the Summer of 2016. She earned her Bachelor of Science in athletic training from the University of Maine, she graduated magna cum laude in the spring of 2016. The Oxford, Massachusetts native also grew up playing sports. In high school, she had injuries of her own that brought her to a sports doctor where she learned about athletics and nutrition. She was drawn to the merging of these two areas. Orrell received her master’s degree in rehabilitation science, online from the California University of Pennsylvania where she graduated in the winter of 2017. Through her graduate courses, she gained certification as a National Association of Sports Medicine – Corrective Exercise Specialist.

Alongside her role as an athletic trainer, Orrell has an interest in track and field. She often helps out at meets outside of school and sometimes even competes. Her involvement in track and field meets results in her to taking care of all kinds of injuries. Orrell recalled the time she had to give an older gentleman CPR. She said that she was still in shock after the incident. “Thinking about what had just occurred, was just so emotional and crazy. My emotions had no idea what to do,” said Orrell.

According to all three trainers, the best part of being an athletic trainer is taking an injured player and working with them to get them healthy again. The athletic trainers all said they get the most satisfaction when they see athletes do well both in their academics and in their sport. When students go from injury to winning, the trainers get both the victory and the pride in helping get the athlete there.