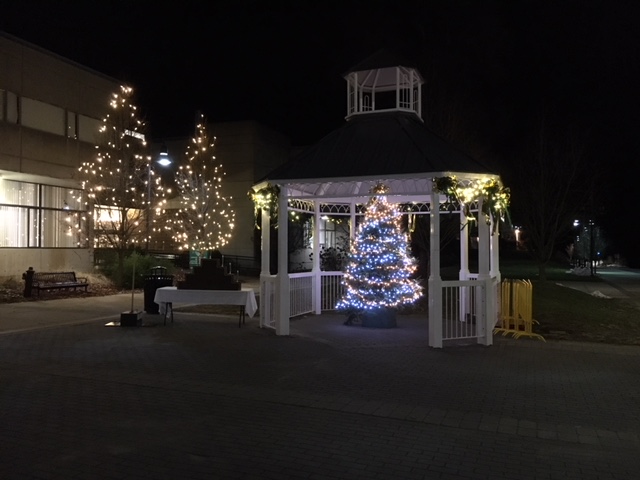 Fitchburg State University holds an annual event to bring the campus into the holiday season. This year it was held on November 29th, 2018. The campus lighting celebrates the spirit of not only Christmas but different holidays as well, such as, Hanukkah, Fiesta of Our Lady of Guadalupe, and St. Lucia Day. In front of Conlon in the gazebo were a Christmas tree and a menorah.  The Christmas tree was the only one lit up at the end of the night.

Rachael Skulsky, who had attended the event the year before, stated “it was cute last year, it was cute this year. It celebrates the joy of the holiday season even though I don’t celebrate Christmas.” Skulsky is the Jewish ambassador of the Center of Diversity and Inclusiveness.  Skulsky thinks that the school does a good job of including other religions. Skulsky states, “I think it does well. I’m Jewish, which is very exotic here. There are not many Jews on campus.”

Taryn Andrews thought differently. “I don’t think it’s catered to at all. It is mostly Christmas,” She said. In the background, Christmas songs were being sung by Dave Binder who was the musical entertainment for the night.

Binder announced to the group of people, “Enjoy your food, enjoy your friends. Happy holidays.” Binder sang songs in the Holmes Dining Commons. Though Binder sang mostly Christmas songs, he also sang a Hanukkah song. Samantha Mensah, a student who must have spoken with Binder beforehand, ran up to Binder and they sang, “All I Want for Christmas is You.” Her friends stood in front of her, their phones poised in the air as they filmed. Santa also made an appearance, speaking with a few students. He took pictures with a few girls before disappearing.