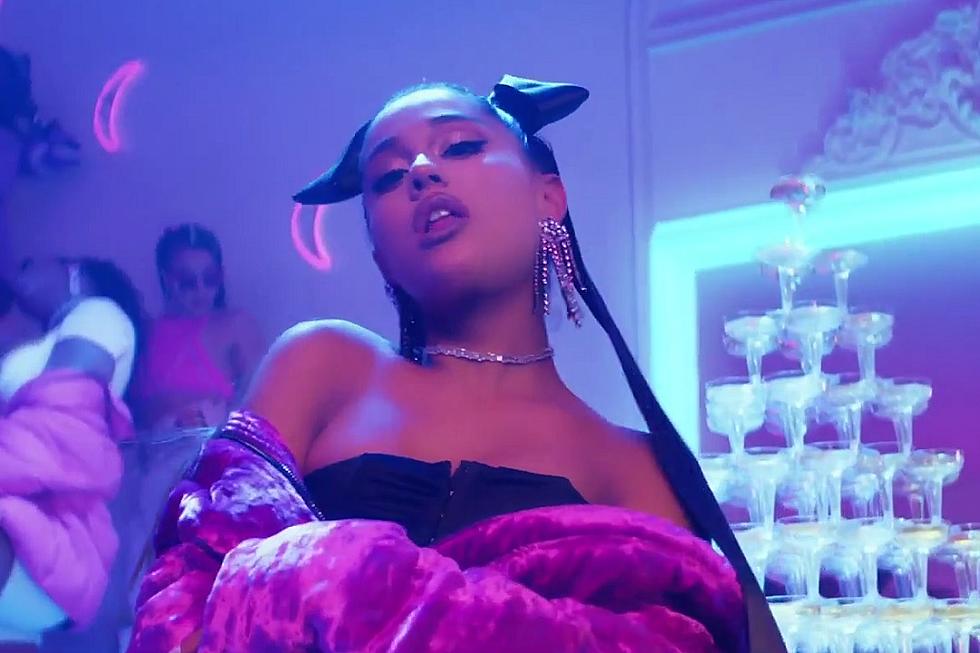 International pop star Ariana Grande has had to deal with many obstacles in recent years that have affected both her musical career and personal life, the Manchester terrorist attack, the death of her former partner and successful rapper Mac Miller, even to being in hot water after getting caught licking a donut on a shop camera. While mainstream media and fans were quick to label the growing star as a “poor little rich girl”, someone who was not necessarily grateful for the fame and fortune that she had risen to over the years and this admittedly led the singer into “dark places” where music was her only emotional outlet. This would be the key to bringing about her fourth studio album Sweetener, an instant global hit with singles like “no tears left to cry” and “God is a Woman” already gaining the artist two Grammy nominations that will be announced February 10th.

Originally released in April of 2018, this single by Ariana Grande is a cocktail of musical depths, possibly talking about the rocky relationship she shared with former partner Mac Miller, however some critics believe she may be remarking on the obstacles of her past like the terrorist bombing at her 2017 Dangerous Woman Tour in Manchester, England. She talks about picking herself back up after going through this emotionally charged time in her life, “ Ain’t got no tears left to cry/ So I’m pickin’ it up, pickin’ it up/I’m lovin’, I’m livin’, I’m pickin it up.” Grande tells us in this song that not only does she have a boy she’s “ vibin’” with too, but that she way too mature to believe in the rumours spread about him. This single gave Grande the opportunity to introduce a new era of music to her growing legacy, an era of self-empowerment and emotional growth.

Grande then went on to drop her single “thank u, next” a couple months later in November, where it broke the top “Hot 100 Chart” and has remained there for more than seven weeks now. This single would become a smash hit,  showing Ariana Grande’s personal growth as a woman with a few rocky relationships under her belt. “One taught me love/One taught me patience/And one taught me pain/Now, I’m so amazing.” In the lyrics, she praises her former partners for helping fuel her personal growth, each of them showing her something new for her to love about herself. While she does use this song to reflect on her exes, what’s more important to her now is her relationship with “Ari” and how she can handle the pain that comes with heartbreak now.

With her album Sweetener setting pop records still from it’s original drop month in April of last year, Grande’s fans were shocked when the singer announced via Instagram and Twitter that she had more than enough completed material for a second album.  They waited for a few weeks until Ariana Grande made the announcement that her first featured-single off her new album would be “thank u, next”, and her second would be the fun and whimsically bad-ass “7 Rings”. This next single tells the very true story of when Ariana took her best friends to Tiffany & Co. to shop and ended up buying matching diamond rings for them all. “I’d rather spoil all my friends with my riches/Think retail therapy my new addiction.” The singer goes on to parody the famous song “Favorite Things” originally sung by Julie Andrews in the Sound of Music with her own list of loves; “Breakfast at Tiffany’s and bottles of bubbles” and “Lashes and diamonds”, and all of these things make her a more self-confident woman who knows what she wants in life.

In a recent Instagram post Ariana can be seen posing with her creative director Alfredo Flores for her new album “Thank U, Next”, set to drop on February 8th, and has it captioned with the following: “grateful <3 for the besties, for the music, for the journey to self-love and for being okay with not having a clue what the f**k we’re all doing here but encouraging, lifting and loving each other while we’re here”.  Ariana Grande is showing her fans the raw side of personal growth with her latest album and promises nothing but bangers for her fifth studio piece “Thank U, Next”. Check out Grande’s album February 8th via her VEVO Youtube channel, her Spotify profile or you can download it on iTunes.

*Correction: February 12th, 10:00 am, An earlier version of this article incorrectly stated that Grande’s new album was titled “7 Rings,” the name of the album is “Thank U, Next.”