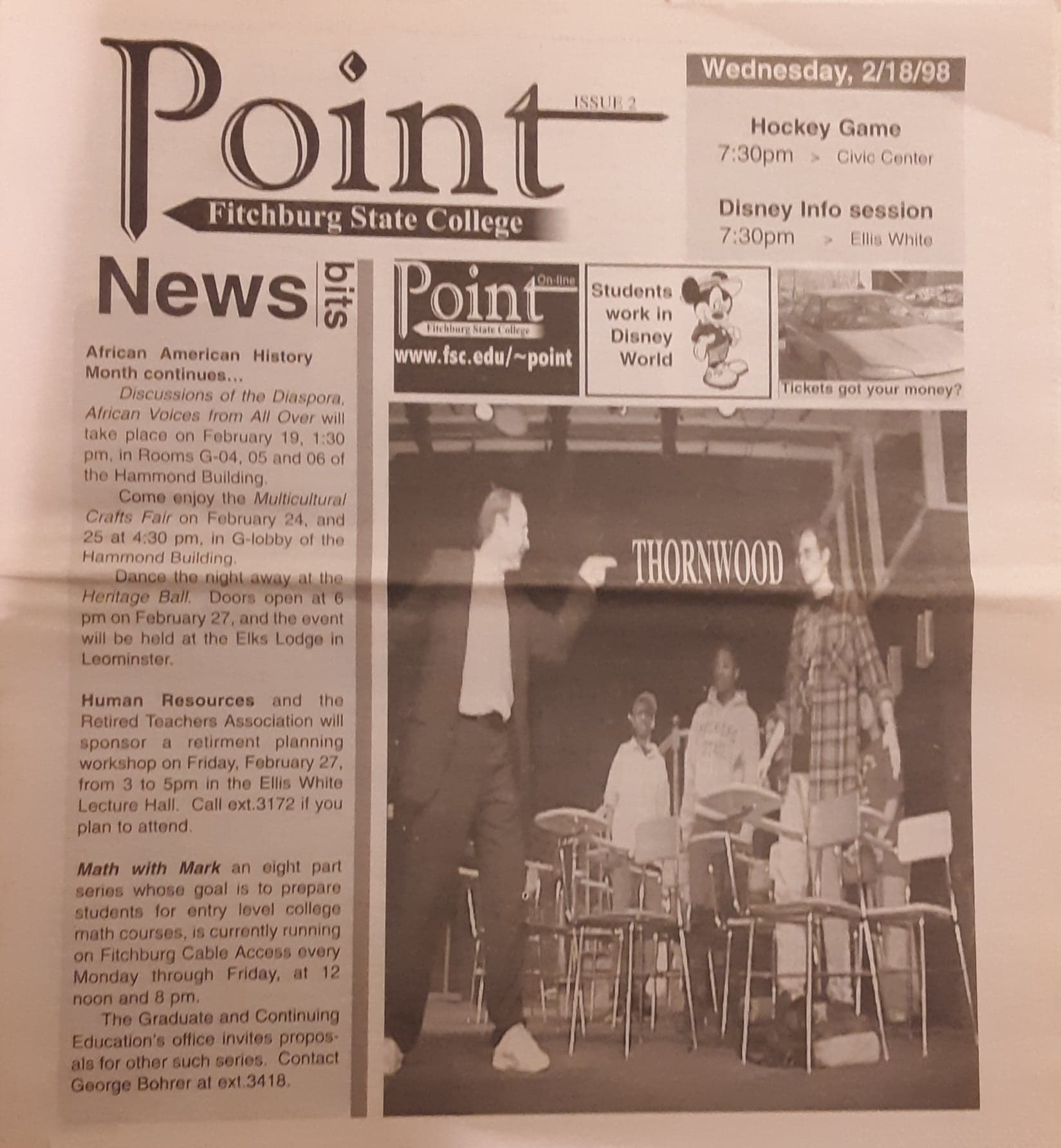 Fitchburg State University’s student-run newspaper has been a part of the university for nearly as long as the school has been around. While not always called The Point it has survived in a variety of forms since it first started over 100 years ago.

The first known iteration of the school’s paper was called The Normal News, named such for the school’s original name, Fitchburg Normal School. When it originally started, was a state institution that educated and trained teachers for the region’s schools. The earliest, and so far only known, documentation of this paper is from January 24, 1916. By the school’s records, The Normal News ran from 1916 to 1923, for just seven years before the paper started its long history of name changing and becoming the State Norma-Lite, which ran from 1923 to 1926.

From there the paper had an ever-evolving face, not living in one form for long before transforming once again. For many years the paper did not survive under one name for longer than a year or two, living under names such as The College Courier which ran from 1932 to 1934 and The Gavel, which despite only running for a single year, 1934 to 1935, was able to release 10 if not more issues while in production.

It wasn’t until 1936 that Fitchburg States’ paper started to take on a longer running format, becoming the Stick, the school’s second-longest surviving form. In production from 1936 to 1955, the Stick ran for a total of 19 years, even producing a summer version The Twig in the summer of 1946. The Stick saw the school through a number of changes and transformations and made way for a more permanent and lasting version of Fitchburg State’s paper. Versions such as the Kampus Vue which ran from 1956 to 1969, a total of 13 years and ‘the Strobe’ which ran for 16 years from 1981 to 1997.

The year 1969 sees the paper’s most controversial, and yet most well-known form, the Cycle. Despite only running for five years, from 1969 to 1974, the students during this brief period had a significant impact on both the paper and the school itself. Unafraid to speak up about issues they saw as important, the Cycle published articles about religion, sexuality, politics and even pieces aimed at the school itself. While not always following journalistic form, the students of the time showed tenacity and stubbornness that allowed them to fight to share the truth, as they saw it.

One major fight made by the Cycle was the Antonelli v. Hammond case in 1969. After attempting to print an excerpt from an article Eldridge Cleaver’s, the founder of the Black Panthers, novella “The Black Moochie” and being told not only that they could not print the article, but that future articles would have to be screened before they could be printed, John Antonelli, a staff member on the paper, and others decided to fight back for their right to freedom of speech and freedom of the press, taking then-President John. J Hammond Jr. to court and winning.

The Point, as the paper is currently known, is the longest-running form of Fitchburg State University’s’ student paper. Starting in 1997, The Point has run for a total of 22 years, beating out the Stick, which had previously held the title for longest-running by three years. While The Point may not be as controversial as some of its predecessors it has seen it’s fair share of change and adaptations over its run. The year 2007 marked the change over of the paper from a student-run club to a class. This change gave students the opportunity to earn credit for all the work they put into the paper. A few years later, in the year 2009, The Point moved largely online.

While change is always just around the corner, there is one thing that the campus and the larger community can always depend on. The Point staff will never waste your time, and will always get to the point.