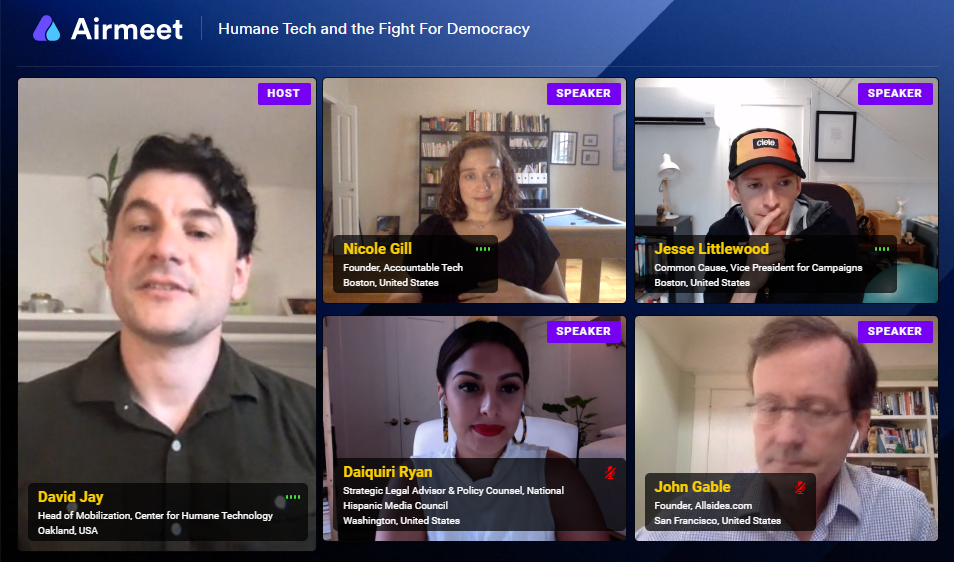 On October 2nd, riding off the success of the Netflix documentary The Social Dilemma, major players and architects in the technology industry held a virtual panel discussion titled Humane Technology and the Fight For Democracy. The discussion, which was free to sign up for and join, was viewed live by 300 people on the video chat website Airmeet. The event was hosted and moderated by David Jay, the Head of Mobilization at the Center for Humane Technology, the company that one of the prominent speakers in the documentary, Tristan Harris, founded to try and introduce a better online space for the world.

The panelists included were Nicole Gill, Founder of Accountable Tech, Jesse Littlewood, Vice President for Campaigns at Common Cause, Daiquiri Ryan, Strategic Legal Advisor & Policy Counsel for National Hispanic Media Council, and John Gable, Founder of Allsides.com. All of them made clear that there needs to be more ethical responsibility from big technology companies when it comes to consumers, along with consumer vigilance toward online information.

The documentary which made this panel discussion possible brings to attention the damage social media is having on humans and society in general, told through interviews from individuals who helped to create the online space we all consume. The movie has struck a chord with viewers and tech giants alike, even causing Facebook to issue a seven-point statement claiming the film “buries the substance in sensationalism.” Fans and reviewers of the film meanwhile have called it “eye-opening,” especially with the whistleblowers being people who once worked for companies like Google and Facebook.

The panel discussion was specifically focusing on the misinformation running rampant on social media and how it is affecting the upcoming US Presidential election and elections going forward. During the hour-long program, the panelists informed viewers how to deal with misinformation they see online and how they can get involved to make positive change to the online space we all share.

“People are fed up with the extreme slants, with the extreme bubbles, or the extreme anger,” said John Gable during the discussion, referring to the political discord in the United States today. Gable says concrete things people can do to mend the gap immediately is to talk with people, emphasizing for individuals to “reach out to your opponent, somebody who disagrees with you politically, go out with them together and talk about the reality [of today’s world.]” Gable went on to say that communication is key between people who share different viewpoints if we want to avoid continued polarization in America.

Jesse Littlewood said during the panel that one of the best ways for people to gain trust in the voting process and build unity with peers is by volunteering as a poll worker or a nonpartisan voting monitor. “What’s interesting about that is in our experience of doing this work, people see problems and they solve those problems. They don’t come away from their volunteering experience depressed about all the problems in their [voting] system, they have a transformative experience where they realize that this system is made up of individuals across the board who are trying to do the right thing. And [when] they’re confronted with real-world problems, they’re solvable problems. So we actually have this really fascinating experience with our volunteers who come out of their volunteer experience working to protect our elections, having actually more faith in the system after they participated in solving some of the challenges of it.”

Nicole Gill and Daiquiri Ryan spoke on misinformation during the discussion, offering advice on what to do when you see it and how to avoid it. “One of the best things you can do is use your own social media feeds to flag when that’s happening [misinformation] and let the experts know so that they can take action,” said Gill. She maintains that everyone has to remain vigilant against false information. “I can’t stress how important that is because unfortunately, we are all moderators right now of content. There isn’t enough that AI and the human moderators that these companies employ can do, and so it is on all of us.”

Ryan offers a simple solution to unworthy news, ignore it. “If you see misinformation, do not engage with it. Don’t like it, don’t share it, you’re only going to encourage the algorithms to promote the content. And that’s how it goes viral.”

Gill also recommends Facebook users to turn off their recommendation features for Facebook Groups as they are unrated and the website algorithm does a good job of “recommending more and more extremist content to folks who might just be looking for health information or voting information and suddenly they get recommended to join these groups that just spew misinformation.”

After the panelists concluded their presentation talks, the discussion was opened up into small, eight-person “tables” where viewers were able to communicate with one another as well as the panelists themselves.

There was a noticeable trend from the audience really wanting to combat this social media addiction talked about in the documentary for their children. The audience, consisting of many parents, feared for their children’s self-esteem and confidence as they grow up in this new technology-laden world. One mother, who requested to remain anonymous, expressed her fear of what harm social media could have on her teenage daughter who “lives on her phone and is obsessed with her body image.” This was something echoed by other audience members as well as the panelists themselves. Many children in their teens and younger are the first generation to grow up with a smartphone in their hands and we are seeing the unknown effects of this play out before our very eyes.

Beyond the social media addiction and the plethora of misinformation online that was discussed in the film, the host of the panel discussion, David Jay, expressed that trying to find common ground with individuals is the first step in overcoming the algorithms and working toward becoming a united people once more. “I encourage you to do what we modeled in this panel which is start with story. Start with the story about the values that bring you here [to this panel discussion] and the reasons why you hold those values. That will make it much, much easier for those of us who may come from different places ideologically to start from a place of connection.”

To view the panel discussion in its entirety, visit https://youtu.be/49pwWclBVzo

Another panel discussion is scheduled for Friday, October 16th at 1 pm EST titled “Outthinking Hate.” You can sign up to view the discussion for free via humanetech.com/join-a-conversation and clicking on the sign-up button.

The Social Dilemma is streaming now on Netflix.