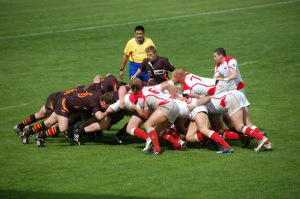 Picture is a Courtesy of Rugby Store http://rugbystore.co.uk
By Megan Brown

Ever wanted to try a new sport? College may not be the place to do that but in recent years college students all around the United States have been wanting to try a sport new to them; Rugby. Our school is just one of the many that is being a part of the trend.

Rugby has been around for a long time and is one of the top ten most played and most watched sports in the world; the United States is just a little late to the party when it comes to Rugby.

In recent years there have been many movies to do with this sport, Invictus starring Morgan Freeman and Matt Damon and Forever Strong starring Penn Badgley and Gary Cole, both true stories, are just a few.

Our school is now becoming part of the scene with Andrew Krawczynski leading the group. Krawczynski is a junior clinical exercise major who tried to start the Rugby team his freshman year but could not get an advisor on board.

He was more successful this year with the help of Tom Wasierski, Assistant Director of Maintenance and Operations in the Capital Planning and Maintenance Department at Fitchburg State. Tom played Rugby at Mass Maritime and then everything just started to snowball.

It was word of mouth that got other students involved with the club. But once it was out there it took very fast. There are practices every Tuesday, Wednesday, and Thursday from 5-7pm. Anyone is welcome Krawczynski said, no experience is needed.

People who have never played the sport before are called “New Bloods” and the game is not one you can really experience, it is one that you must do. “It is like explaining sex to a virgin” as Krawczynski said in our interview.

The main objectives of the game are that there are 15 players per team on the field, eight forwards and seven backs. Forwards are referred to as “ugly” and backs are “pretty” this is because the backs make the points while the forwards defend them.

You can only throw the ball to the side or back, there is no padding in this game and you are only allowed to hit the other player in the lower half which usually means you go down with them.

This is a culture behind the game, the game is a gentleman’s game and everything is left on the field. There are no grudges that continue after the game is over.

At the end of most games, the two teams partake is a “social” involving food and drinks provided by the home team as a polite gesture to the away team for traveling to the game. The uniforms that are worn for this sport are even formalized; they are similar to polo shirts.

Krawczynski is hoping that come the fall their club will be an official team at Fitchburg State University and if anyone wishes to come and practice now to come to any of the practices during the week. There are about 15-17 students actively practicing right now.