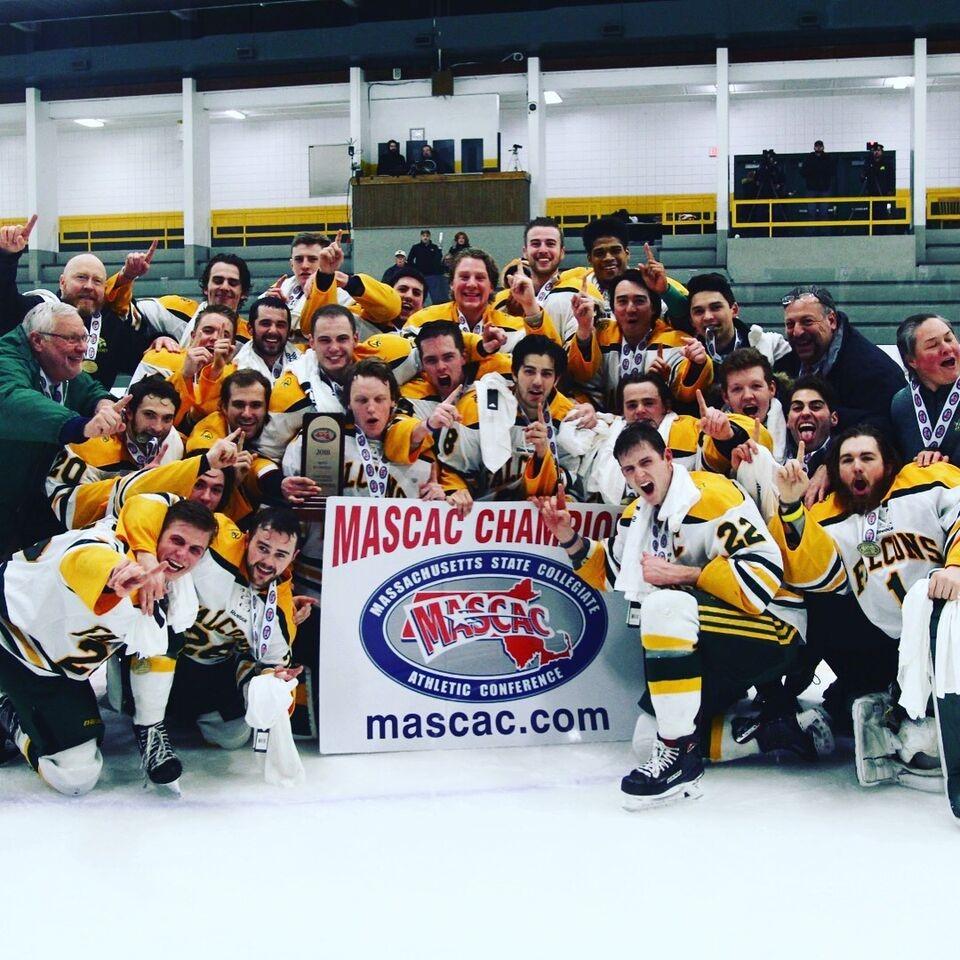 Hockey is a sport measured in goals, but every team in the Massachusetts State Collegiate Athletic Conference (MASCAC) tournament had just one goal in common: to take that championship home. The Fitchburg State men’s ice hockey team made that goal a reality last Saturday, March 3, when they defeated UMass Dartmouth by a score of 2-0. The win earned the Falcons a berth in the NCAA Division III national tournament, where they will face Worcester’s Nichols College at Levy Rink in Harrisville, Rhode Island, this Saturday at 7:00 PM.

The Falcons, who have not lost a game since January 28, have eight consecutive wins and have scored 47 goals in this winning streak while allowing just 21. Despite an incredibly strong scoring effort that the Falcons have shown all season, the final game was a battle of both goalies. Falcons goalie Brian McGrath stopped all 45 shots aimed at him on Saturday. McGrath stated, “As soon as I came here, I knew I was here to stop the puck and win the MASCAC.” He has since been awarded Player, Goalie, and Rookie of the Week awards by the conference, as well as being named Most Valuable Player of the tournament.  Nichols has scored 13 goals in their last two games (both playoff wins), so it will be up to McGrath and the defense to keep their successful efforts coming.

The game itself may have only had two scores, but what it did not lack was emotion. 375 people attended the game, which was held at our own Wallace Civic Center. The first period ended scoreless, but that didn’t discourage anyone. Left Wing Nick Dinicola enjoyed upon the general positive attitude accompanied by his teammates’ continued pursuit of a win. He reflects,  “Our team stayed positive and did all the little things right. We knew that to win a championship, we would have to stay confident, stick together and just out work them.” While the Falcons held their lead for the rest of the game following the first of two their goals in the second period, the game was still close, so it was necessary to not become too excited. But at the end, there was a cause for celebration. Left defenseman Connor McPherson, along with the rest of the team, was elated: “Once the buzzer sounded and the crowd went wild I was overcome with euphoria.” After the conclusion of the game, the spirit of the big win was infectious. Pictures were taken, hugs were given, and cheers of support from the audience were scattered all around the ice. McPherson says, “My brothers and I will have this moment engraved in our hearts for the rest of our lives.”

While the Falcons have a season record of 17-6-3, it was not until the month of February that they truly started firing on all cylinders with those eight wins in a row. Nevertheless, the team had positive foresight about the end result. McPherson, who recorded an assist in the second period of last Saturday’s game, affirmed those feelings, saying “This year we have something special. I’ve never seen a team closer than this one. I feel our chemistry really reflects the bonds we’ve made since the first day of training camp.” Throughout the season the team played better and with more intensity with every game, and in the end that close bond was rewarded. As the national tournament begins, the team hopes to reap more benefits from this season’s outstanding efforts.

It is impossible to win a championship caliber game without an excellent display of teamwork and a hunger for the prize, so Fitchburg State students should be very proud of what their men’s ice hockey team has accomplished this season. There are none prouder than Right Defenseman Evan Byrnes, one of the team’s three seniors. “As a senior, I have dreamed of winning the MASCAC and with hard work and dedication as a team, we made that dream a reality. Making it to the national tournament is great for our program and our school, and we are ready to battle for a national title.” The road to that national championship continues against Nichols on Saturday, and as there are few things more reassuring to a team playing what could be a tough away game than a strong supporting crowd, student attendance could be a factor in the Falcons’ flight to the top.