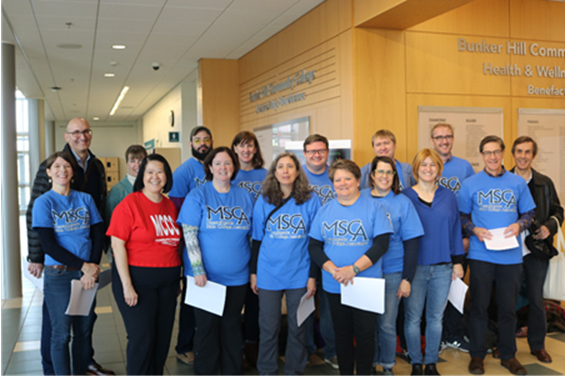 Massachusetts State College Association (MSCA) is a union that represents faculty and librarians. There was a consolidated grievance initially filed by the President of the MSCA regarding workload equivalencies, which see faculty being paid at a lower rate than what had been agreed upon in the new contract. Equivalencies refers to a formula that calculates the compensation or credit for specialized classes. These classes, just to name a few, are laboratory classes, independent studies and studio instruction. However, according to a timeline written by Maria Hegbloom, the Bridgewater State University Chapter president, the Council of Presidents believe that they were not in violation of the new contract, and the MSCA then filed for an immediate arbitration.

Graziana Ramsden, president of the Faculty Association for the MSCA, has explained that the financial changes were the only ones not taking effect. She also states that “the raises we agreed upon were minimal –a two percent per year raise for three years—this raise barely covers the cost of living increase in Massachusetts, which is one of the most expensive states to live in the U.S.” Aruna Krishnamurthy, Fitchburg State Chapter President for the MSCA, explained “While the new contract gives only modest raises of two percent each year from 2017-2020, the MSCA prided itself in achieving equitable compensation for equivalencies in this round of bargaining. But faculty were dismayed to find out that none of the new equivalencies –agreed upon by both parties—had been honored in the workload of Fall 2018 or 2019.

MCSA President C.J. O’Donnell wrote in an article on published on the union website that President Francis McDonald from the State University Council of Presidents, “ruled that the grievance is premature, that there is no violation, that there is no evidence that any university is not using the new equivalencies (except at Mass Maritime) and ignores the union’s issue.”

Despite all sides agreeing on the new contract and all documents signed by the Commissioner of Board of Higher Education, it has not been submitted to the Governor for funding, according to Krishnamurthy.

According to Krishnamurthy Work-to-Rule is in place because of the refusal to retroactively implement the new equivalences that were agreed upon by the Council of Presidents.

Under Work-to-Rule, faculty and librarians continue to do everything stated in their contract but do not participate in extra-contractual work. As a result, faculty do not voluntarily attend weekend or evening university events or take on additional credit responsibility beyond the 12 required day-load credits they must complete. The faculty has the right to refuse independent studies, but few ever do because they are determined to make sure students are not affected by Work-to-Rule according to Krishnamurthy. She also believes that the goal is to push back against management and not the students and that the students will not feel the hardships of Work-to-Rule.

In an email from Carlos E. Santiago, Commissioner for Board of Higher Education, to O’Donnell, Santiago writes, “I am concerned that if the contract cannot be funded sustainably in its current form, it could result in excessive increases in students fees and cost cutting measures that would have adverse impacts on students and faculty alike.”  Libby HA a student at Fitchburg State University stated, “for how much we pay for higher education in this country we should be more involved in the quality and process behind it.”

While Krishnamurthy showed enthusiasm that the MSCA will win. Hegbloom has stated that “we anticipate that once submitted to the Office of Employee Regulations our contract will continue to face issues.”

Krishnamurthy has stated that some faculty, including herself, have engaged in information picketing at Board of Higher Education events, including sit-ins and holding up signs during meetings. During the negotiations, and now the period of Work-to-Rule, Krishnamurthy said that she has distributed MSCA t-shirts and has organized lectures to promote faculty input and involvement. Union members have also called and emailed the commissioner’s office in attempts to create pressure to get the contract finalized and funded.

Krishnamurthy stated, “We were not about to give up….We need to put our foot down, or there be no change.“