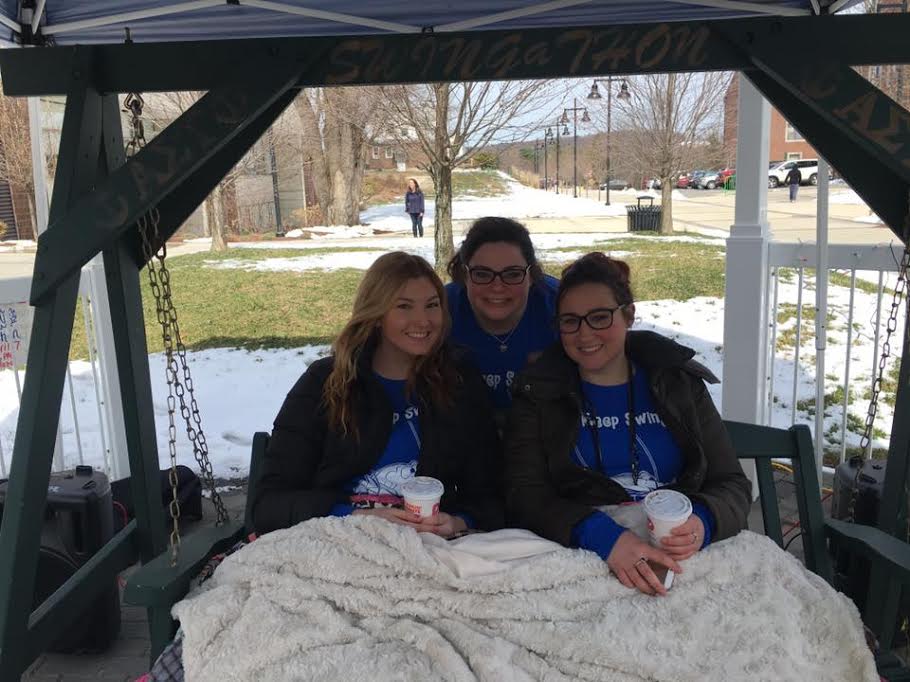 Every spring, the Gamma Psi chapter of the Alpha Sigma Tau sorority has appeared in the quad of Fitchburg State on porch swings to raise awareness for their local philanthropy RAINN (Rape, Abuse, and Incest National Network). This year’s Swing-a-thon will occur on Wednesday, April 5th, 2017 at 9 a.m. The event will last a total of 36 hours regardless of the weather.

RAINN is the largest anti-sexual violence organization in the United States. With the help of over 1,100 sexual assault service providers, they are able to give aid to many who have suffered from sexual violence. It is also the creator and operator of the National Sexual Assault Hotline, whose number is 800-656-HOPE. Statistically, about every 98 seconds a person will experience sexual assault. RAINN works non-stop to continue to decrease these numbers.

Sophomore Paige Prevett, the director of Alpha Sigma Tau’s philanthropy and planner of this year’s Swing-a-thon describes why it is that they swing. “We swing to give those who can’t speak out a chance to be represented. We do this for the little girls being sexually abused every night, for the woman who is being beaten by her husband, for the girl at the party who was raped but somehow the blame fell on her”. This is a cause that is close to the hearts of many and especially to the sisters of Alpha Sigma Tau, who strive for the betterment of women.

Along with swinging in the quad, Alpha Sigma Tau also has table hours in Hammond street level and outside the dining hall where the sisters will be accepting donations. There will also be the Standing in Silence event a week leading up to Swing-a-thon which gives the student body and faculty a chance to get involved. Standing in Silence will be in the quad between classes beginning March 29 at 10 a.m. until 4 p.m. and will continue with that schedule until March 31. When asked about why she started it, senior Jess Martel, the creator of Standing in Silence, said, “I started this event to show people the true statistics of how often sexual abuse takes place.” People will see the sisters holding up signs showing statistics about rape and sexual abuse. This is not just a Greek life event, but one that brings the campus together to help to eradicate sexual violence.

People will be able to make donations to RAINN at the table hours or during Swing-a-thon. There will be small things available for purchase during that time that will also count towards donations. Other donations can also be made directly to RAINN’s website at https://donate.rainn.org/. Last year the sisters raised $2,884 and RAINN doubled the amount by making a total donation of $5,768. These funds will go towards RAINN’s programs and services that they proved to help survivors and to educate the population on sexual violence.

So stop by, say hi, and make a difference by fighting back against sexual violence.