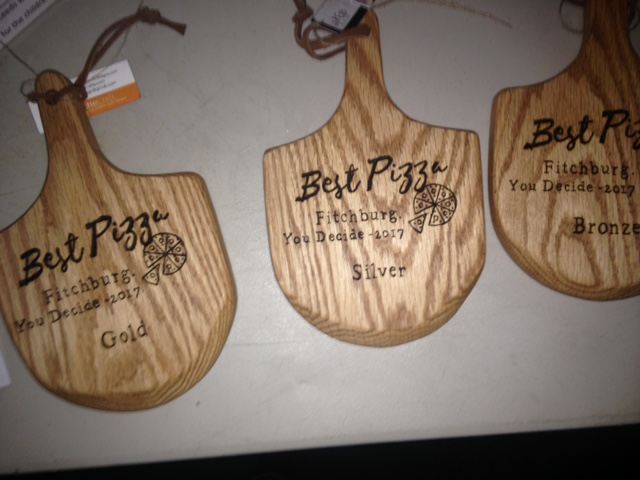 Prior to winning, Peter Cote, owner of Beemers, said, “We’ve been wanting to do it, so I said this would be a good night to try it out, and if people like it [the french bread pizza] we’ll put it on our menu.”

“We went through over 30 lbs. of pork—I gotta put more in the smoker! I’m so happy people got to try it.”

“I was surprised Beemers won,” said Sam Squailia, host of Discussing Fitchburg Now on FATV, and core-volunteer of the event. “Coming into it, I didn’t think they had a chance because they never made pizza—it isn’t on their menu! But the pulled pork and coleslaw, that was unique, delicious.”

Beemers was followed by Super Fans Deli and Pizzeria, a returning winner, who placed second, and Mike’s Pizza and More, who clinched the third-place spot.

Il Forno, last year’s champion, did not place in the top three this year.

The night itself went off without a hitch—unless you count running out of plates and needing more pizza cutters as a hitch. “Wow—it was slammed. We sold out of tickets,” said Squailia.

“It completely exceeded my expectations. We more than doubled [last year’s attendance]” said Aerevyn Harteis, the organizer of the event, who actually had to run out to the store at one point during the night to buy more paper plates.

“I think there was a lot of support and people were very excited about it” she added.

When asked what she might improve on or anticipate changing for next year’s event, Harteis said, “We’re always going to look for ways to make it bigger and better. I think we were a victim of our own success with twice the people [this year]. I’ll take that problem.”

Though Beemers may have won in what was deemed an “upset victory” by Harteis during Squailia’s live Facebook stream of the announcement of winners, the title Best Pizza in Fitchburg likely means something different to each pizza lover.

Roxy Kurtz of Fitchburg said, “There were two that I liked: Godfrey’s had like a buffalo chicken…Country had a feta, spinach and tomato one. I love feta cheese, I never imagined it on a pizza and it was really good.”

Chris, a former resident of Fitchburg, and Courtney, a current local resident, who were attending the event for the first time, said “We really like Espresso.”

Melissa Thibodeau, the owner of J&M’s bar in Lunenburg, said, “I wish that the Lunenburg area would do something along this line. I think it would be great for the community.”

The friendly competition and fun atmosphere of the event made for an overall successful night. Nearly $1500 was donated to Growing Places’ garden project at South Street Elementary School.

As for Cote, he was excited to take the title. “I’m so happy about this, I can’t believe it. I just didn’t want to come in last haha,” he laughed. “Thank you, everybody. I appreciate your vote.”

According to Cote, you can look for this new French bread pizza on Beemers’ menu, “probably within two weeks.”