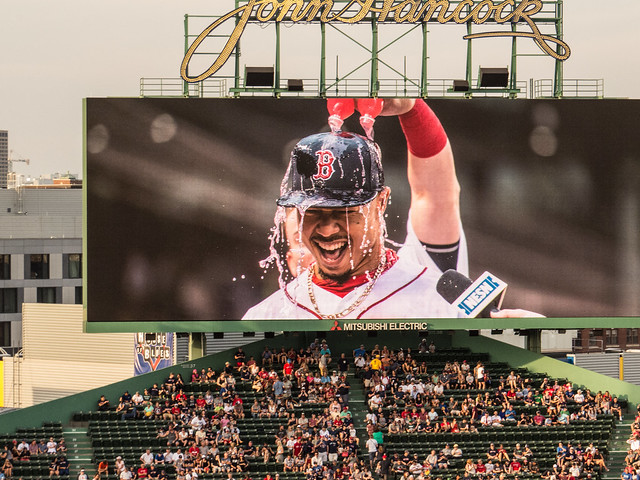 In all of the Red Sox storied history, no player has ever won the Most Valuable Player award and the World Series championship in the same season, until now. Red Sox Right Fielder Mookie Betts captured the American League MVP this season, capping off a phenomenal year for both Betts and the team. Mookie Betts is arguably the best player in the MLB, earning 28 out of 30 first-place votes to easily take the award, with the Angel’s Mike Trout and Cleveland’s Jose Ramirez finishing second and third respectively. Betts helped guide the Boston Red Sox to a franchise record and league-leading 108 wins this season, en route to a World Series Championship.

Whereas in most cases, missing over 20 games during the season would be detrimental to a player’s chance at winning the MVP, the missed games actually helped to justify the Red Sox’s outfielder’s claim to the award.

Despite missing 26 regular season matches, Betts managed Boston’s second only season where a player hit for 30 home runs and stole 30 bases. He led the American League with 84 extra base hits and in runs scored with 129 (tied with Francisco Lindor), with Lindor playing 22 more games than Betts.

The Wins Above Replacement (WAR) statistic, which determines a player’s value based on how many wins he brings for his team over the course of a season compared to a replacement player, displayed Betts’s worth with a 10.9 rating to lead all Major League Baseball. His WAR rating is also tied for the 21st highest in a season in MLB history, being the highest since Barry Bonds (11.8) in 2002. In 136 games, Betts won the batting title by posting an MLB leading .346 batting average, belted 32 home runs, and batted in 80 RBI’s. He also sported an MLB leading .640 slugging percentage, which measures the total amount of bases reached divided by the number of at-bats, along with a .438 On-Base Percentage (OBP), and a 1.078 OPS which is the combination of these two metrics, both of them good for second in all of baseball.

Betts tied for second in the AL with 47 doubles and was 3rd in the league with 333 total bases. His 180 hits on the season were only 12 behind the MLB’s leader Whit Merrifield who played 22 more games than Betts.

As usual, Betts’ plate discipline contributed to the Right Fielder having only 91 strikeouts opposed to 81 walks this season.

Beyond his bat, Betts lead the MLB in defensive runs saved (DRS), according to FanGraphs. DRS gather’s a player’s entire defensive performance by attempting to measure how many runs a defender saved. The stat takes into account things like errors, rangeability, and the strength of the outfielder’s arm to throw base runners out. Betts was announced on November fourth as the Gold Glove winner for his play in Right Field, his third year in a row claiming the defensive honor.

Though Mookie Betts wasn’t quite in the same dominant form during the postseason, his Gold Glove play in the field, as well as his homer in the World Series clinching game five helped the Boston Red Sox win their fourth championship in 15 seasons.

Of the 10 previous times the franchise has had a player win the individual accolade, there have been four instances where the team lost in game seven of the World Series that particular year. Ted Williams in 1946, Carl Yastrzemski in 1967, Fred Lynn in 1975, and Roger Clemens in 1986 all fell one win short of achieving this goal. For Betts and the Red Sox, that drought is now over.

Like Loading...
‹ New Coffee Joint Attempts to Bring Life to Downtown Fitchburg
Marijuana and the NHL: Its Possible Benefits for Professional Hockey Players ›